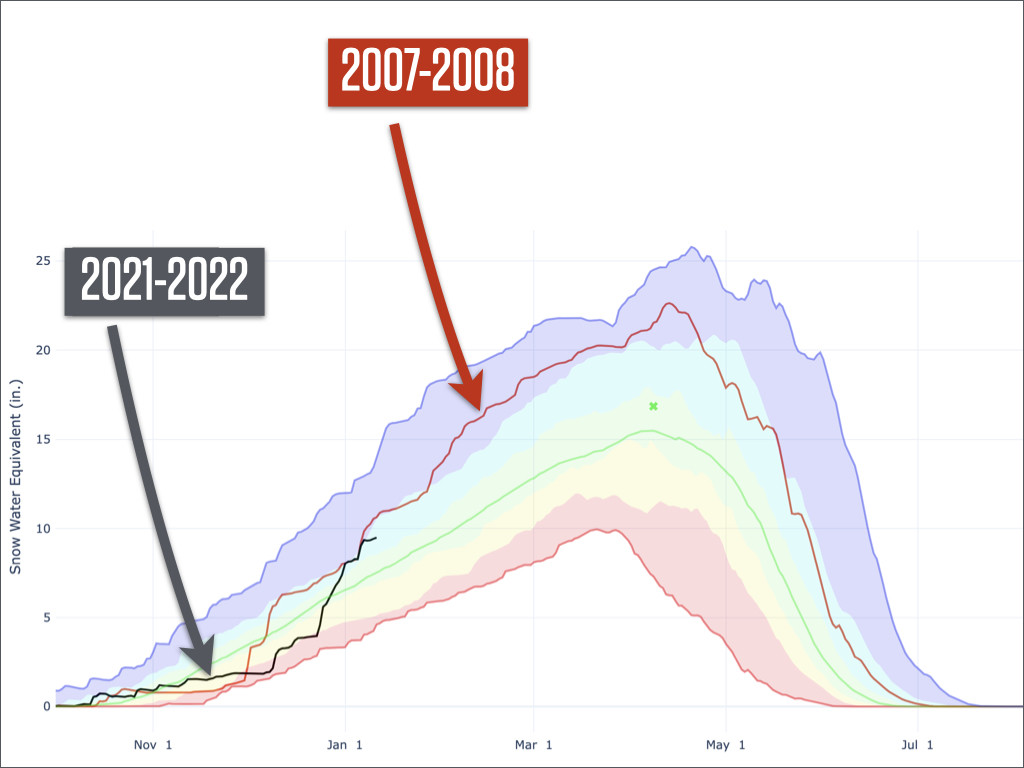 This season's snowpack is somewhat mirroring the 2007-2008 season, and I'll have more on that in the full post. Weatherwise, we will have dry weather on Wednesday and Thursday. Then on Friday and Friday night, expect some snow for most mountains and a light refresh of the snow surface. After that, our next chance for snow will be between January 19-22.

Both winters featured a La Nina weather pattern, meaning that water temperatures in the central Pacific Ocean were colder than average, which influences the storm track over North America in a somewhat predictable way.

Both winters started with well below average snowfall in November.

Both winters reached a snowpack of about 125% of the median by early January.

Both winters saw a slowdown in the snowfall during mid-to-late January.

The winter of 2007-2008 saw snowfall increase again at the end of January and into February, and the longer-range forecast for this winter shows something similar.

The graphic below shows the snowpack trace for this winter and the 2007-2008 winter. 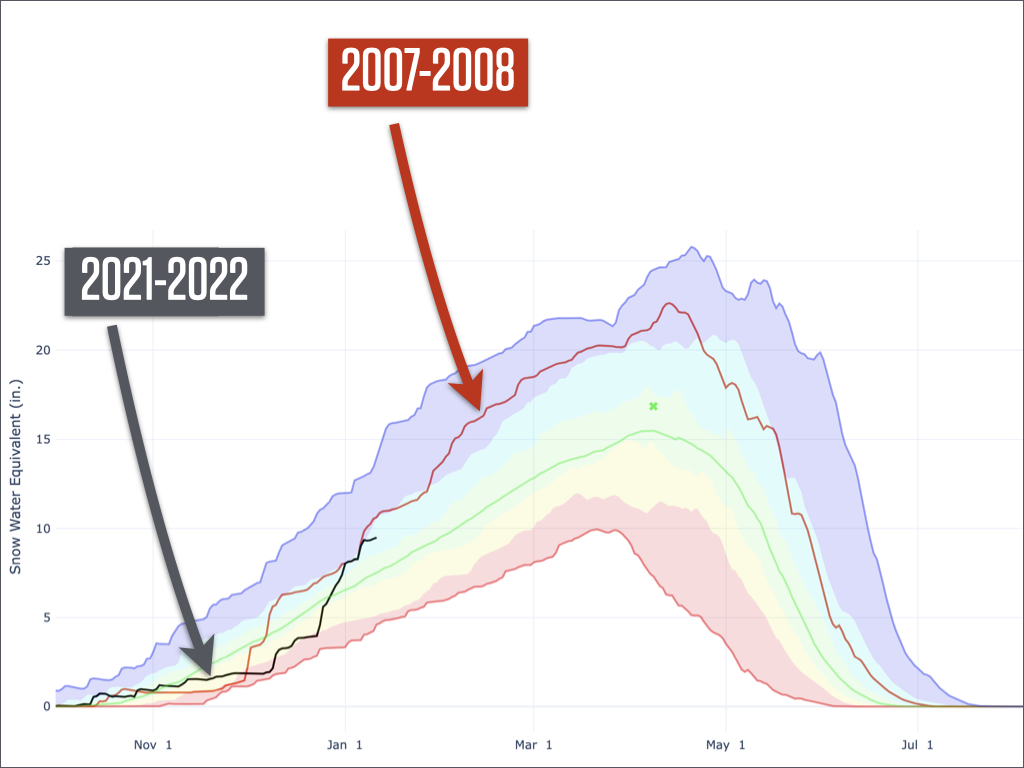 I am NOT saying that we are going to follow the snowpack trace of the 2007-2008 season for the rest of this season (forecasting the snowfall for the next 3-4 months is nearly impossible), but it is interesting to see the similarities between the two seasons.

After seeing a range of forecast outcomes between no snow and a lot of snow, all models have now settled on the 'some snow' scenario. The storm moving past Colorado from the northwest will be close enough to deliver some flakes.

I expect the snow to begin on Friday around sunrise with snow showers continuing throughout the day and into the evening. Snow should end by Friday at midnight.

Total snowfall will likely be light, under 6 inches for most mountains, and the preliminary forecast is around 1-4 inches for most northern and central mountains, and mountains east of the divide. The map below shows the multi-model precipitation forecast which is 0.1-0.3 inches. Converting this to snow is what yields my general 1-4 inch estimate. 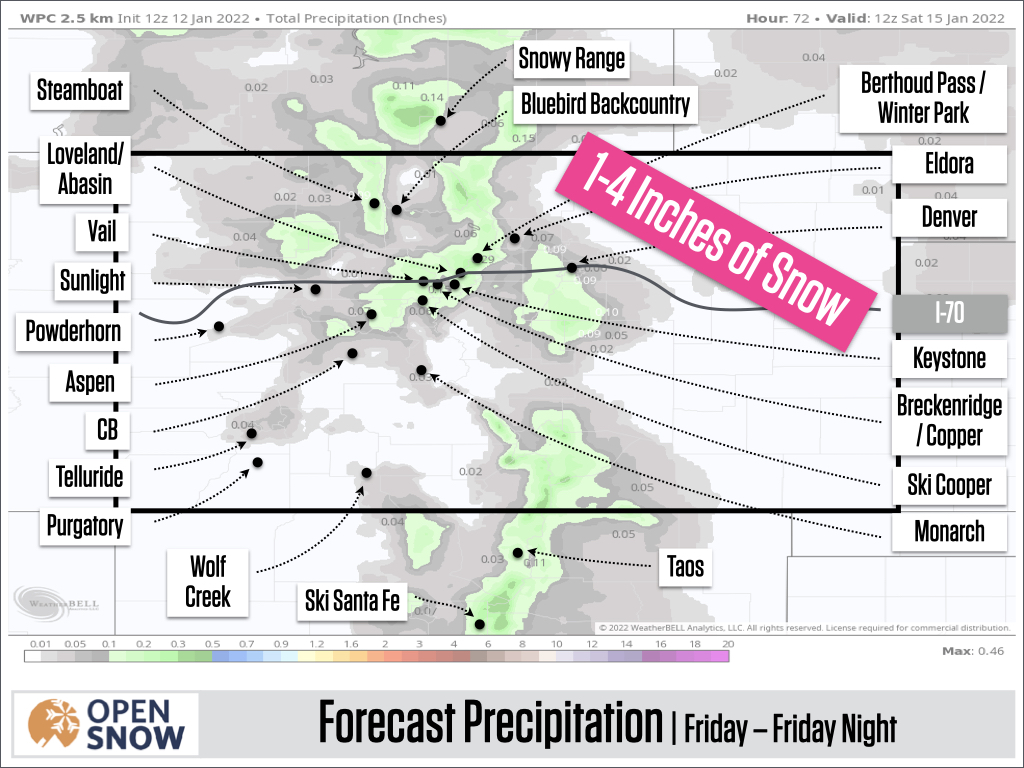 If you're out on the hill on Friday, you'll notice cooling temperatures all day with readings in the teens, and the new snow could soften conditions, though Friday will likely fall short of a real powder day.

The weather on Saturday, Sunday, Monday, and Tuesday will likely be dry with high temperatures in the 20s and 30s. They will be fun days to cruise around and spend time with family and friends on the hill, but they won't be powder days.

Then our next chance for some snow will be between Wednesday, January 19, and Saturday, January 22 when maybe we will see systems graze us from the west and northwest. I am not holding out much hope for significant snow during this time, but at least there will be a chance for some flakes.

The general weather pattern from January 19 to January 26 will continue to keep the coldest air and stormiest weather to our east (blue colors on the maps below).

The European model keeps the storminess a little closer to Colorado (farther west) and is, therefore, the most optimistic that we'll see some snow. 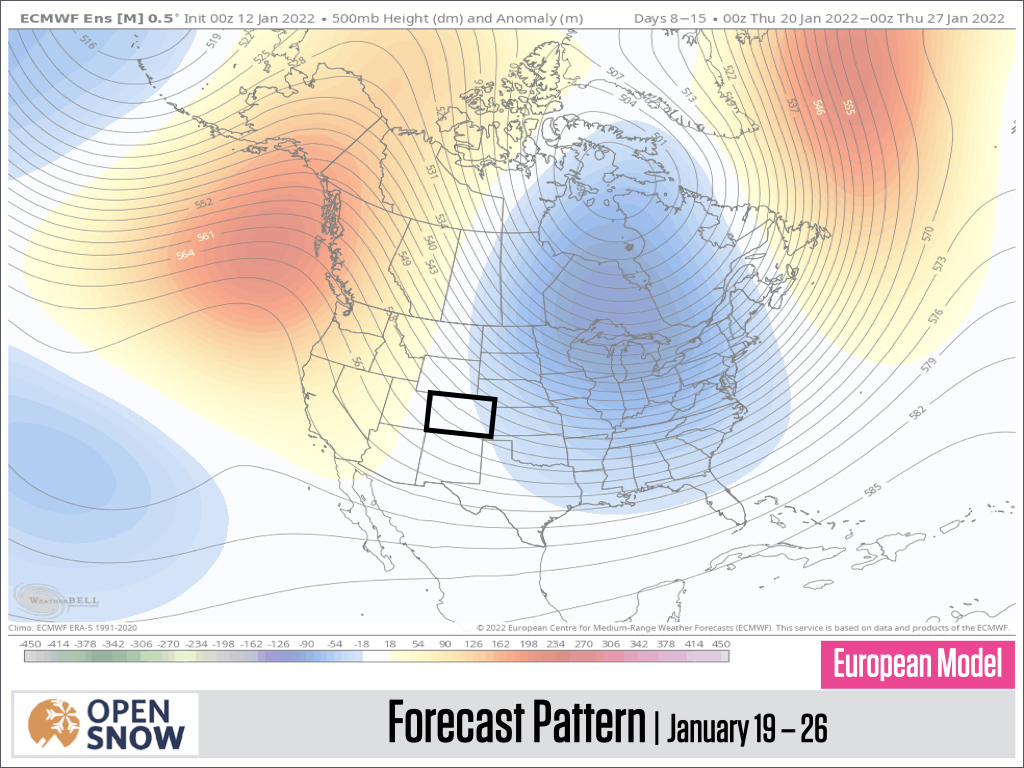 The Canadian model keeps the storminess farther to our east. 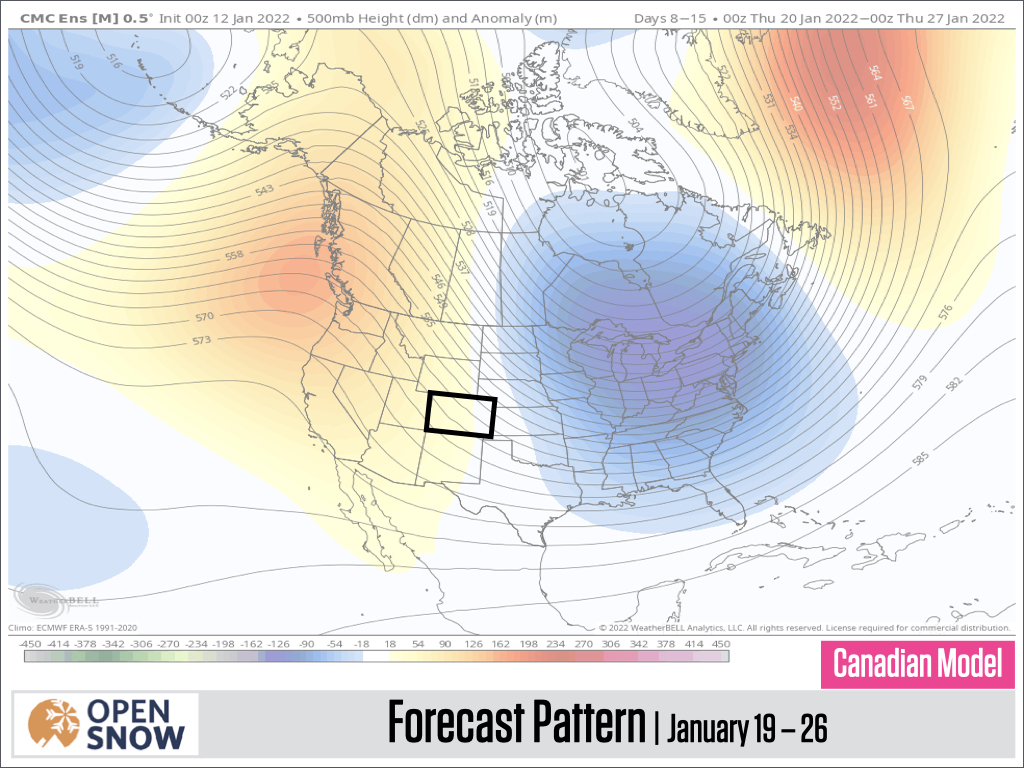 And the American GEFS model keeps the storminess even farther to our east and is the least optimistic that we'll see snow. 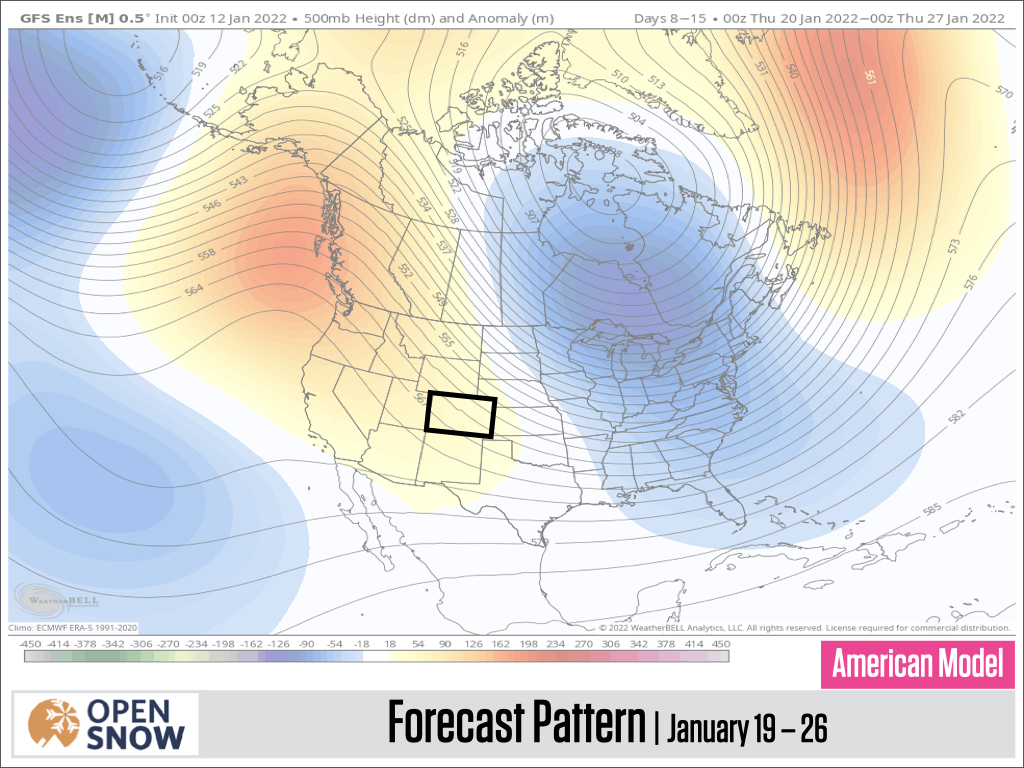 Looking at the latest extended range forecasting models, I am sticking with what I said a few days ago which is that we will not be in a favorable pattern for snowfall during most of the rest of January, yet there should be a flip toward stormier weather and more snow during the last few days of January and into early February. Yes, that is about three weeks away. In the meantime, we can hope to get lucky with a storm now or again, and we can enjoy what we have, which is a snowpack that is deeper than the median with good coverage across the state.