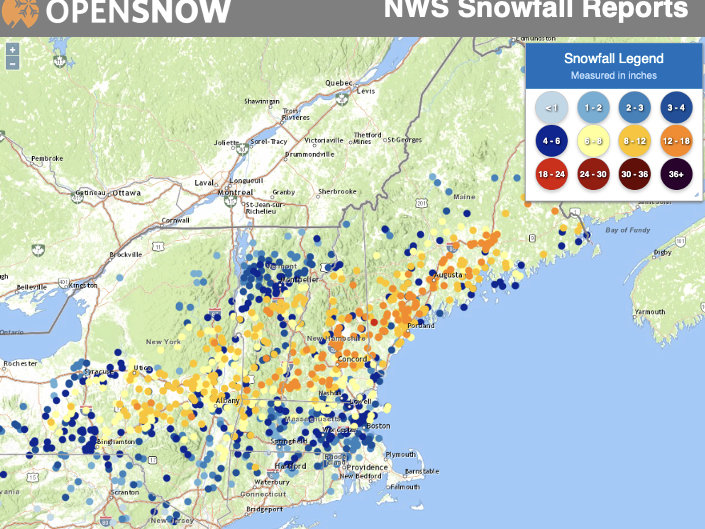 A solid stripe of 8-12" totals fell across southern and central Vermont, New Hampshire, and Maine with our last storm on Monday with jackpot totals pushing 18" in eastern New Hampshire and western Maine. Our next storm is on deck for Wednesday night with another 8-12" possible. 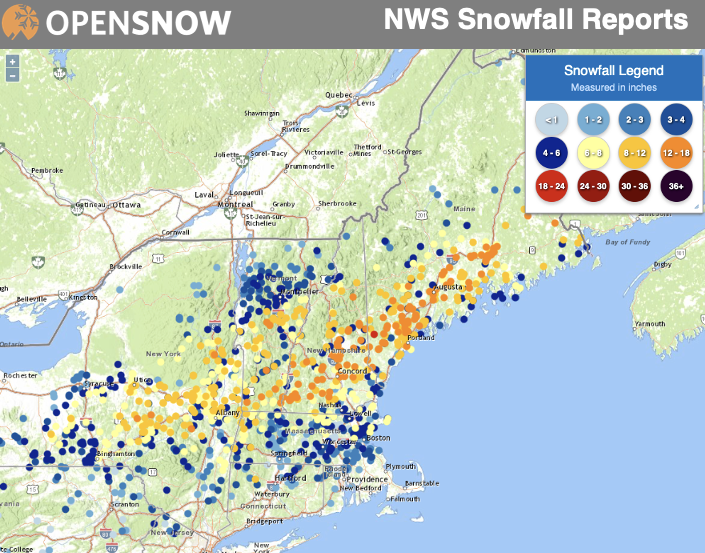 All said and done New England saw snowfall totals that were on the high end and above what was expected thanks to some robust banding that enhanced snowfall rates to ~1" per hour during much of the day on Monday. The storm dropped a swath of 8-12" totals from New York's Capital District, across southern Vermont, south-central New Hampshire, and into Maine. A secondary corridor of 8"+ totals striped through central Vermont and into the Whites, with the Champlain Valley largely getting blanked. 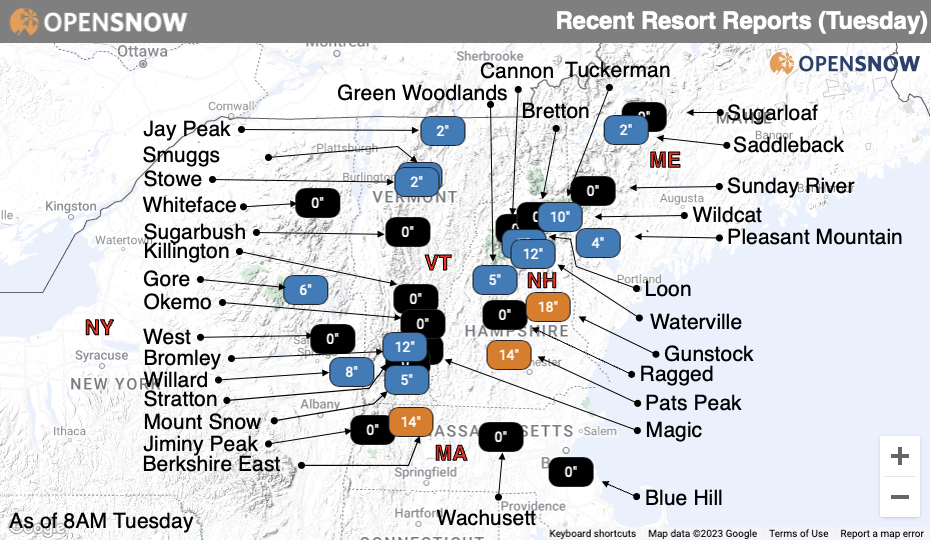 Recent resort reports as of 8AM on Tuesday. Note that 0" does not mean that 0" fell, it just means we didn't receive a valid report from the resort.

The big winner as far as I can tell was near Mt. Sunapee in New Hampshire that notched a NWS report of 17", but the resort itself only reported 13" new in the last 48 hours. The best resort report I've found was 18" new at Gunstock, which was (luckily?) highlighted in my last Daily Snow as the likely jackpot -- although I was only going for a foot! Again, that banding was something.

NAM model forecast animation for 7AM to 9PM on Tuesday.

We're still expecting some light snow showers with occasional squall on Tuesday evening across Northern Vermont as a cold front crosses the region and weakens. Snowfall accumulations will be on the low end with 1-2" possible up at Jay. Otherwise, Tuesday should feature a mix of sun and clouds with temperatures generally in the 20s. Conditions as you might expect are fantastic and will likely get mogul'd a bit if they weren't groomed out overnight. Enjoy.

Our next storm arrives with snow on Wednesday afternoon for our resorts in the western and southwest portion of New England and overnight into Thursday for the rest of the region. The snow is associated with a storm located over the Great Lakes that will cross New England on Thursday. Not ideal. We had hoped for "a hand off" (for the record, I dislike that phrase) to the coast with coastal storm development taking over helping to lock in both cold air and maintain forcing for heavy snow. According to the NAM model above, it tries, but never really succeeds. Nonetheless we should see a solid thump of snow overnight with a good combination of favorable temperatures and forcing to get 1" per hour snows for several hours into Thursday morning before things quickly taper off before sunrise. 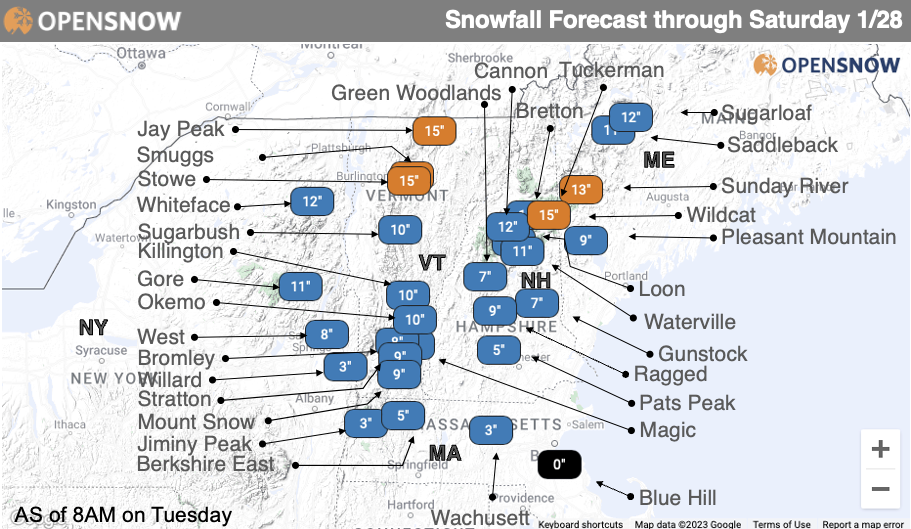 As forcing backs off with tapering precipitation rates and advancing warm air, snow will likely changeover to a mix of sleet and freezing rain (or rain) across southern Vermont and southern New Hampshire before winding down. The backside of the storm will see a return to colder air and upslope flows into northern Vermont where several additional inches of snow will be likely into Thursday night. Storm total precipitation will be once again be in the ~6-8" range across south-central Vermont and New Hampshire with higher totals likely this round across the North Country with 12"+ totals possible in northern Vermont and in the Whites. Spreads with this event are narrower than our last event and are approximately +/- a couple inches. We'll see how it all plays out.

Next update will be on Wednesday morning.