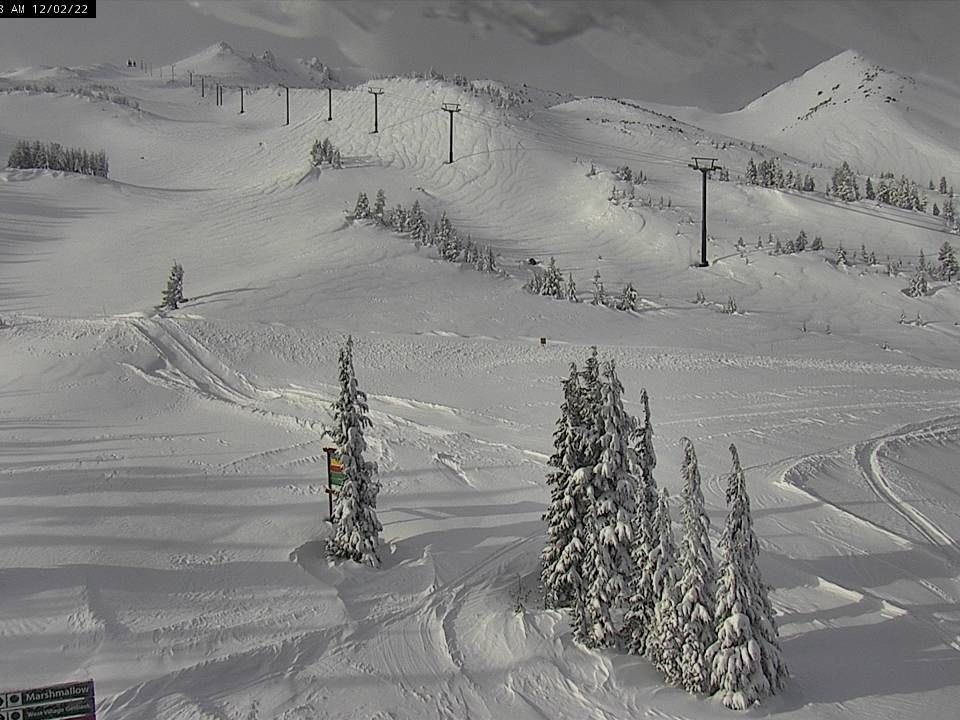 We're heading into a somewhat quiet pattern following the big storm earlier this week. However, several weak storms will continue to bring shots of light snow from Friday through Wednesday and snow levels will remain low with cold air in place. The next storm is likely to arrive around Dec 8th-9th with more storms possible heading into mid-Dec.

Light snow is falling across parts of Western Washington on Friday morning as a new storm system is spinning well of the Coast of Washington. The center of this storm will work its way southward toward California and moisture on the periphery of this storm will just barely deliver a glancing blow to the Central and Northern Cascades on Friday and Friday night. 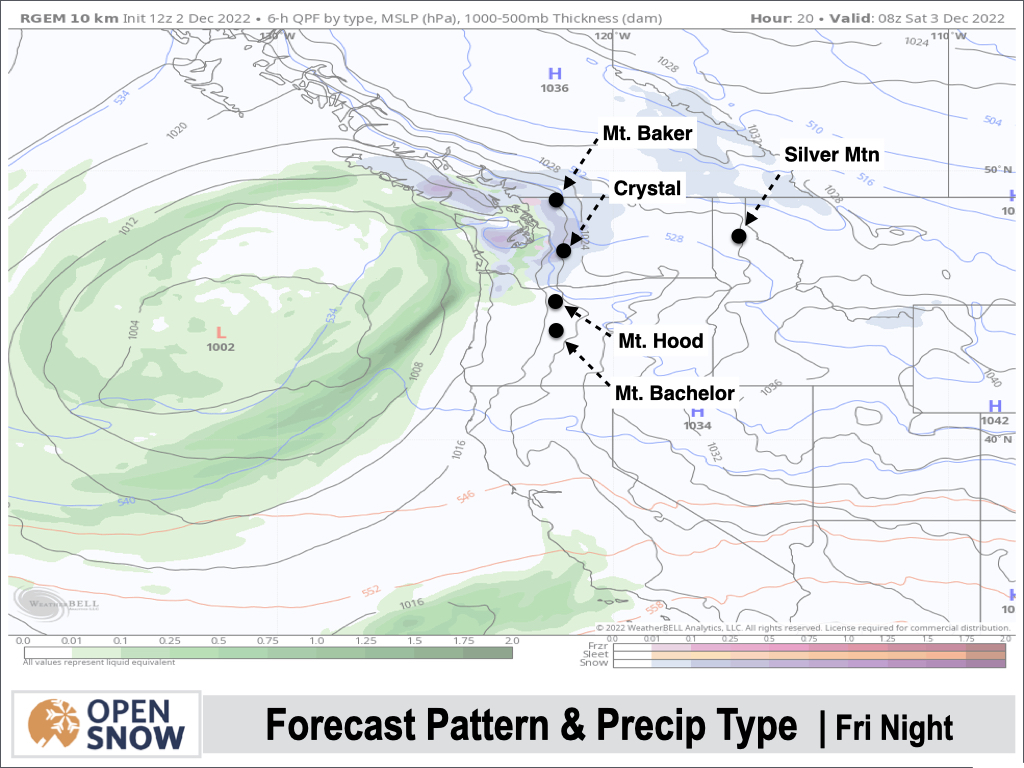 Despite the marginal setup, snow levels will remain very low as light snow accumulations have been reported around Seattle on Friday morning.

The Olympic Range will be hit harder with heavier snowfall expected, but southeast winds will favor the eastern side of the Olympic Range (rather than the typically wetter/snowier western side).

Overall, I'm expecting 1-3 inches of new snow from Baker to White Pass on Friday-Friday night, and Hurricane Ridge will likely end up in the 1-3 inch range as well with higher totals over the central and eastern portions of the Olympic Range. 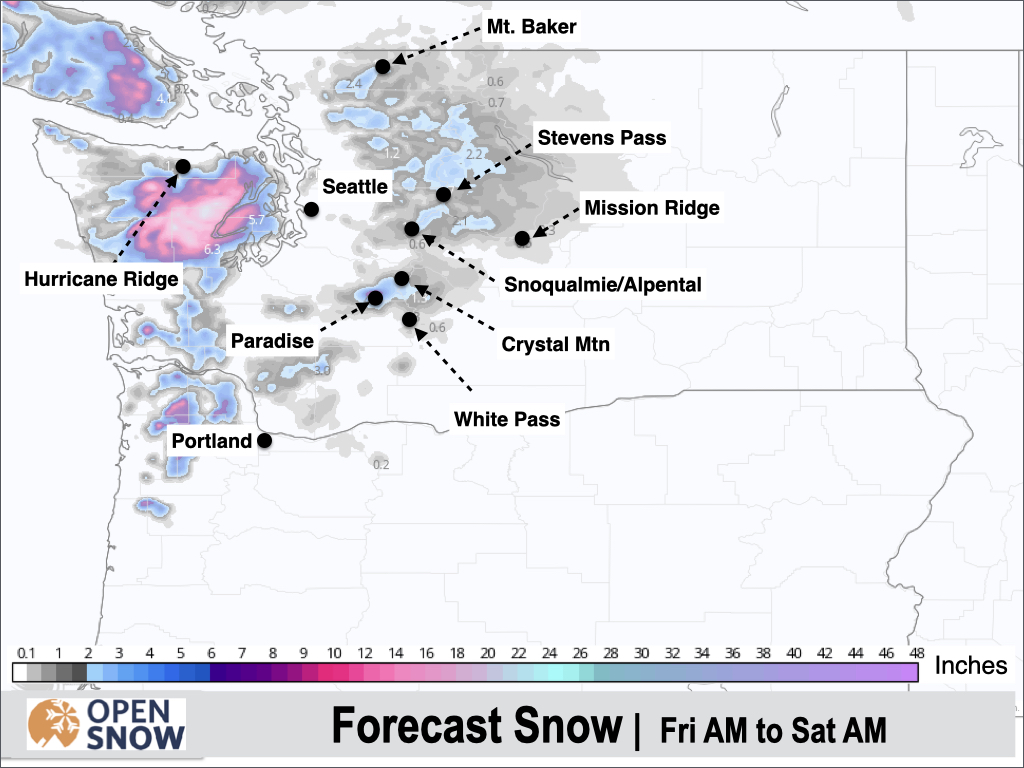 Lingering snow showers will taper off on Saturday morning, then we will see a break in the pattern for the rest of the day on Saturday.

On Sunday, the previous storm system will be located further south off the OR/CA coast, but another weak surge of moisture will approach from the south.

The northern edge of this moisture will work its way into Southern and Central Washington, and areas from White Pass to Stevens Pass may be able to squeeze out another inch or two of snow on Sunday-Sunday night.

South/southeast winds are often favorable for Mission Ridge, but they will be right on the northern edge of this moisture plume, so I would expect anywhere from a dusting or nothing on the low-end, to as much as 4 inches on the high-end. 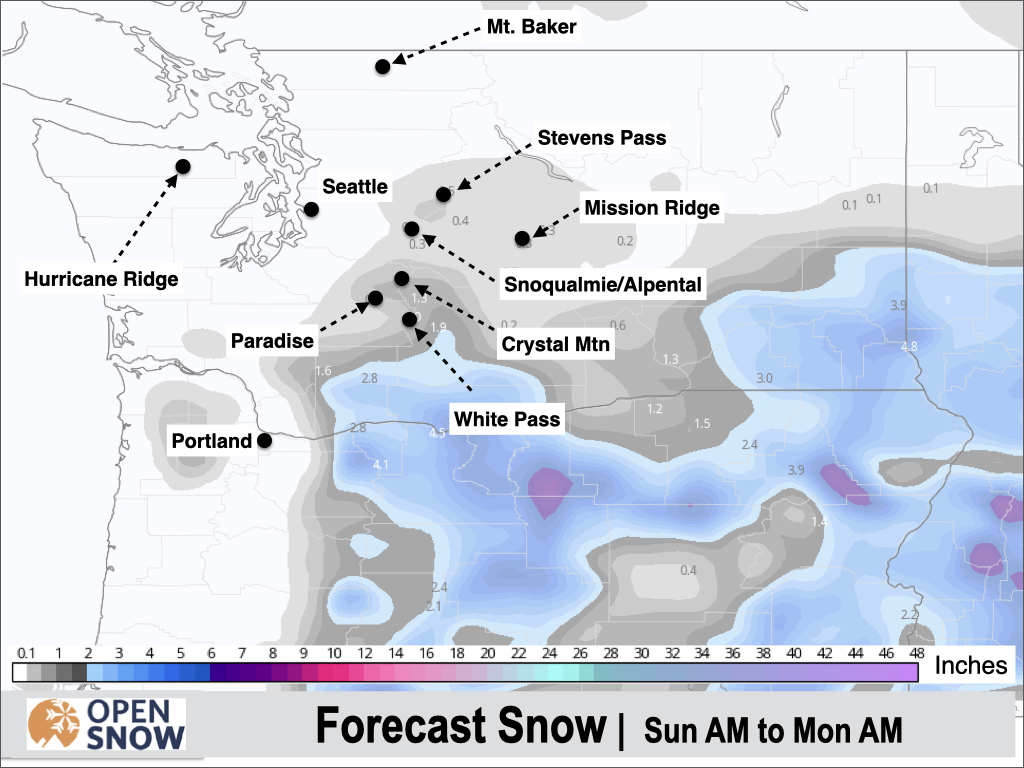 We will see a relative lull in the action on Friday and Saturday as the next storm will hang too far off the coast for the Inland Northwest to see anything meaningful. We could see just enough moisture push far enough inland for some light dustings over parts of the Inland NW, but it will be a close call and we may end up with nothing.

On Sunday, as the storm works its way southward toward California, a weak surge of moisture will approach from the south. This will likely bring some light snow accumulations to Bluewood, while Silver and Lookout will be just on the northern fringe. 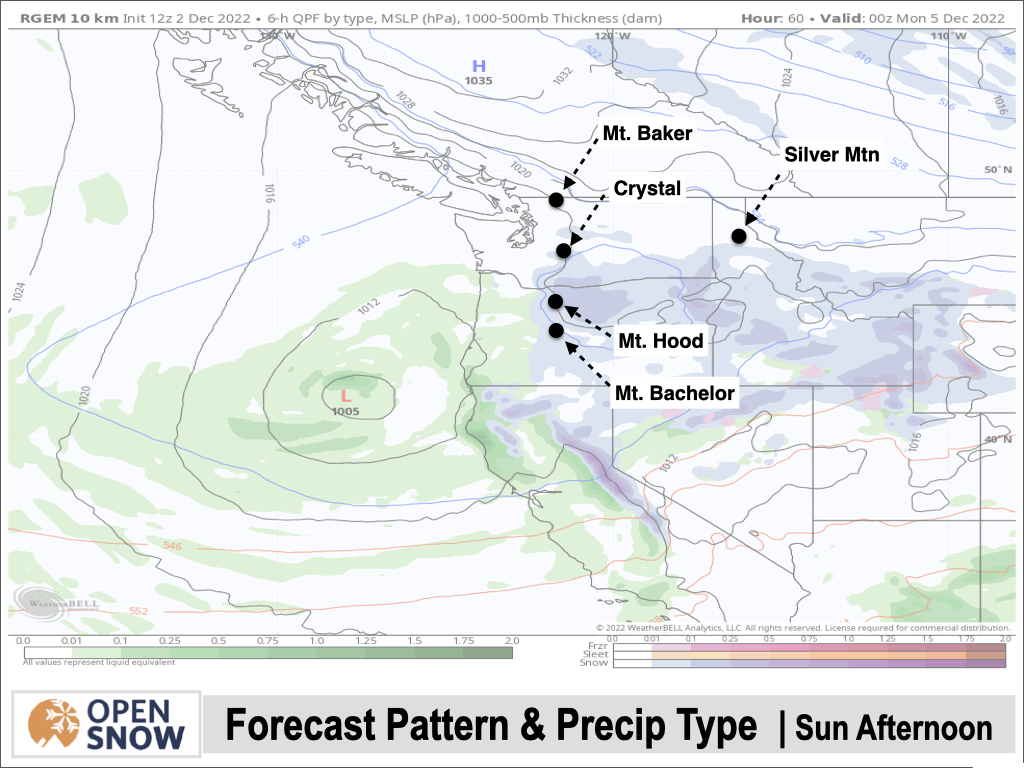 Bluewood should pick up 2-4 inches of snow Sunday-Sunday night, while Mt. Spokane, Silver, and Lookout could see anywhere from zero to 2 inches depending on how far north the moisture makes it. Schweitzer and 49º North will most likely miss out on this round. 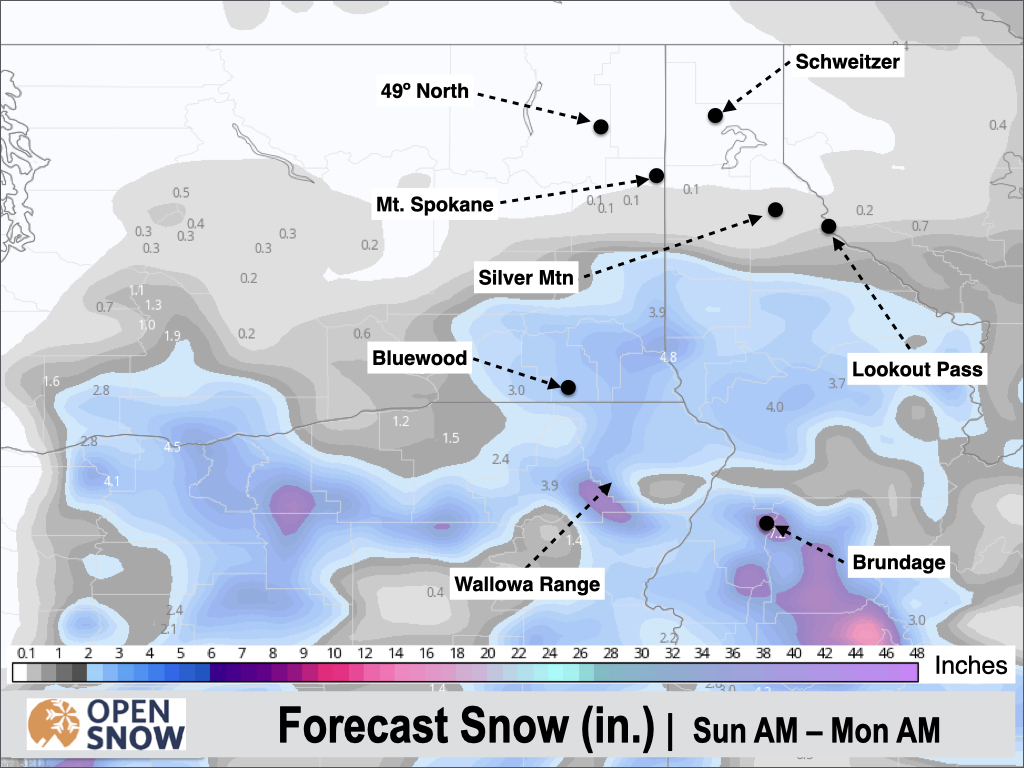 We will see a lull in the action on Friday and Saturday with no new snow expected. Temperatures will remain very chilly on Friday before warming up somewhat on Saturday, but snow conditions will remain outstanding on the slopes.

The next round of snow will arrive on Sunday. A storm system will be spinning off the Southern Oregon/Northern California coast, and a weak surge of moisture will work its way across Oregon from south to north on Sunday and Sunday night. 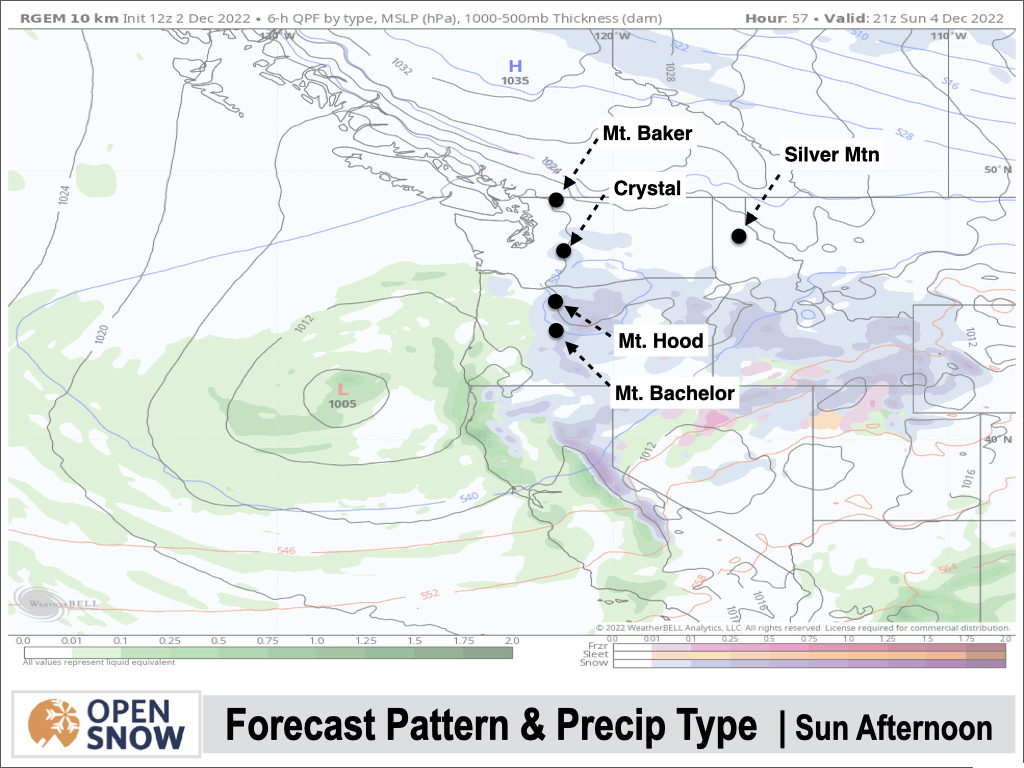 This will not be a major event and winds out of the south/southeast will favor the eastern slopes of the Cascades more so than the western slopes. I'm expecting a general 1-4 inches of snow for ski areas throughout Oregon on Sunday-Sunday night.

Snow levels will remain low through this event (well below base areas), so this will be a nice refresher. 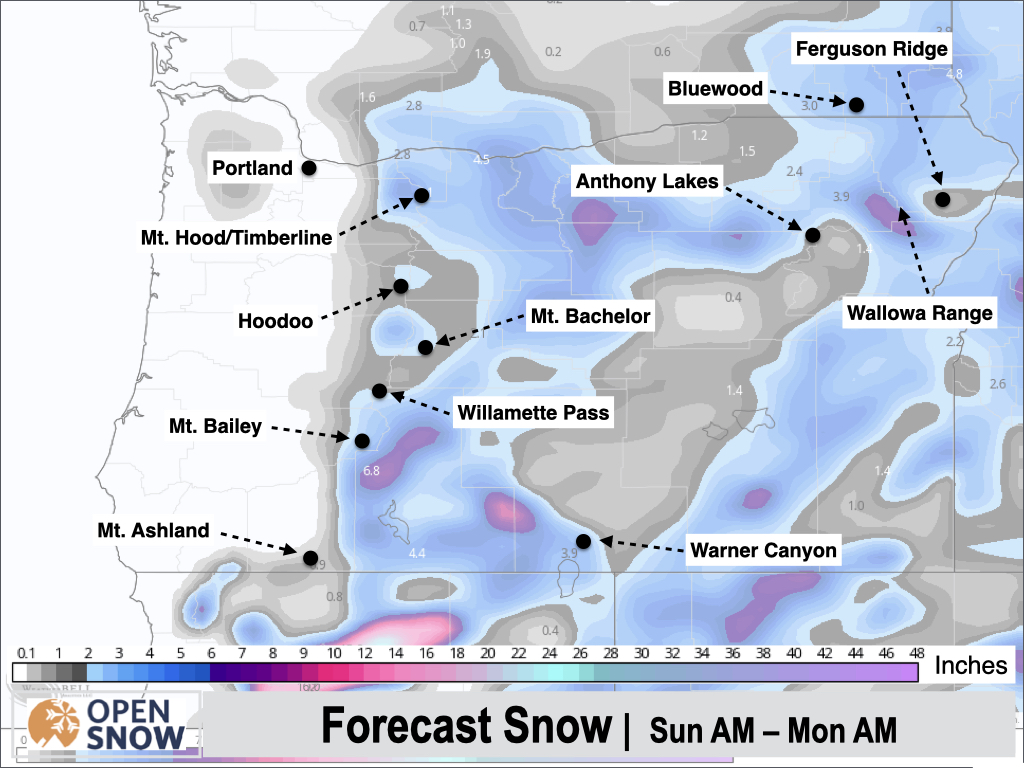 Monday (Dec 5) is looking mostly dry for all areas aside from some lingering light snow showers early in the morning across Oregon and perhaps the Inland Northwest.

A couple of weak disturbances are then projected to arrive from the northwest on Tuesday (Dec 6) and Wednesday (Dec 7). All regions of the northwest will see chances of light snow both days, but I'm not expecting anything more than a couple of inches or so. Snow levels will remain low, however.

The next meaningful storm should arrive around Thursday (Dec 7) to Friday (Dec 8). Another storm is possible after that over the weekend of December 9th-10th. We could see more storms heading into mid-December as well, and at the moment, long-range models are suggesting temps will remain on the cooler side of average.

Thanks so much for reading! With a relative lull in the pattern ahead following a busy week, I'm going to take the weekend to recharge, so check back in for my next forecast on Monday (Dec 5).