Mostly sunny Monday with lighter winds. Tuesday into Wednesday storms just to our north bring in some clouds, gusty winds, and possibly a shower or two. Then mostly sunny and mild Thursday into the weekend. Dry with slightly colder air possible for next week. A pattern change begins around the 20th.

We start the week with mostly sunny skies and highs in the 40s on Monday.

But the jetstream and moisture coming straight across the Pacific are going to take aim at the Pacific NW and northern CA Tuesday into Wednesday.

Once again these systems are going to stay just to the north of the Tahoe Basin... 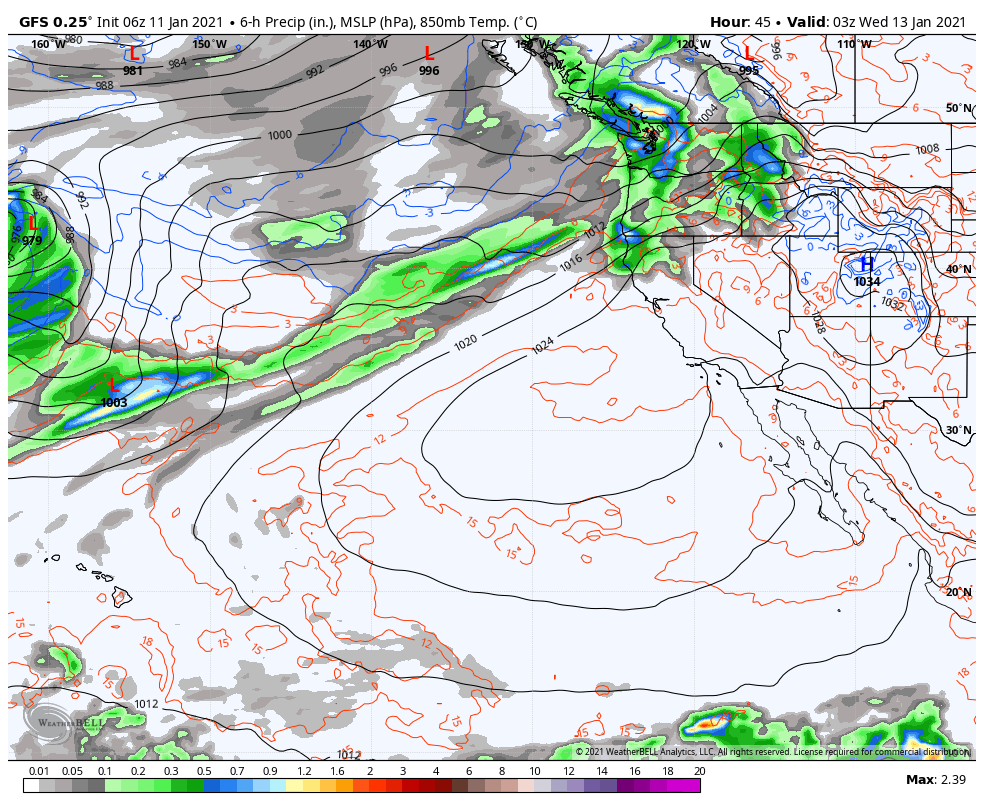 But we will see some clouds and gusty winds Tuesday into Wednesday, and the chance for a few rain showers, especially west of Lake Tahoe along the Sierra crest. Highs lower into the 30s for the upper mountains Tuesday with snow levels above 8000 ft., then rising to around 9000 ft. Tuesday night into Wednesday. Little if any precip reaches the Tahoe Basin. 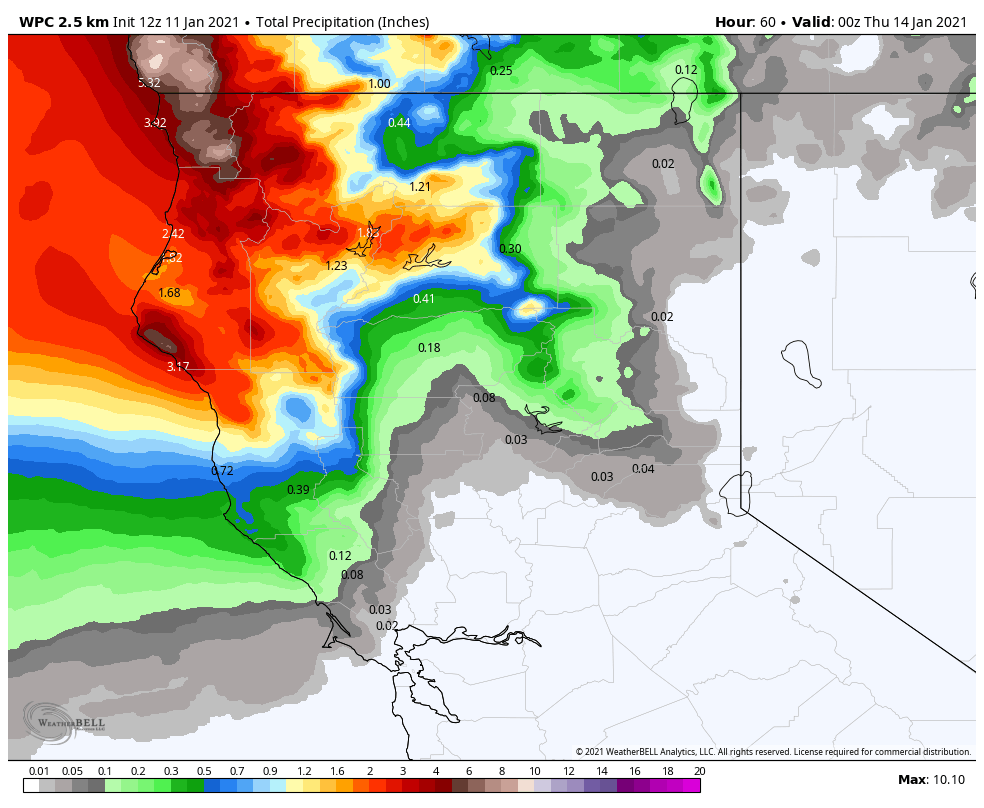 This is similar to the Friday system that brought light showers, but warmer and longer with a chance of showers Tuesday afternoon into Wednesday before the system clears. Winds from the southwest with ridgetop winds gusting to 50+ mph. Highs into the 40s for Wednesday.

Thursday Into the Weekend:

High pressure builds in over the West Coast and amplifies northward by the end of the week. 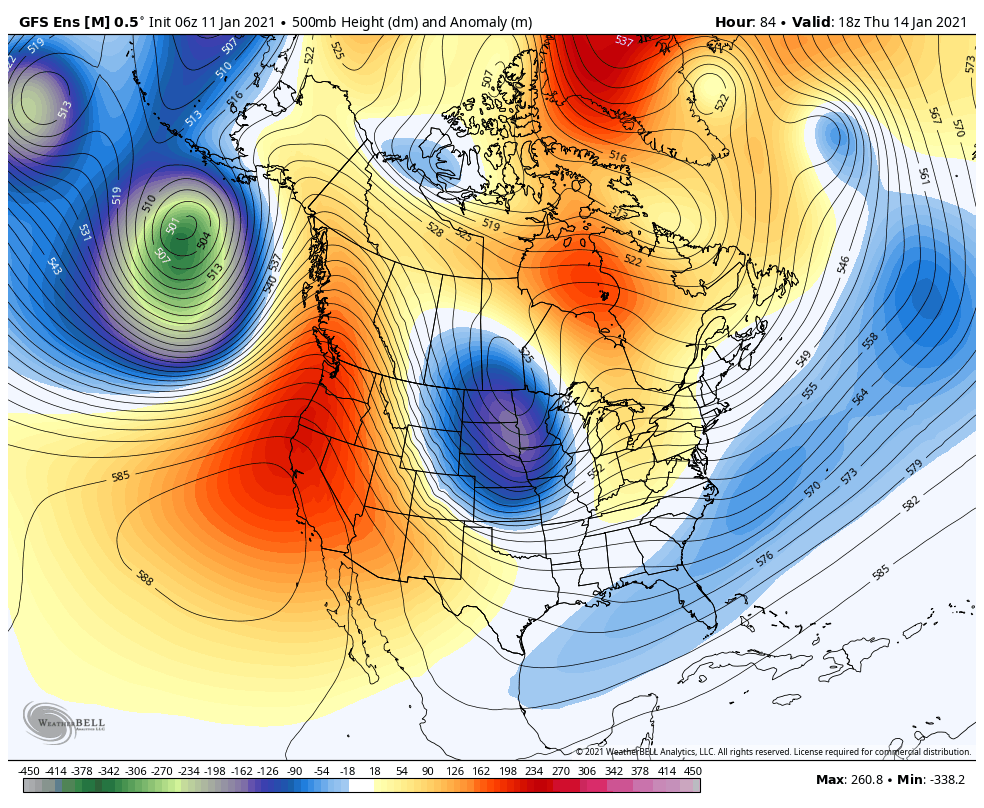 That will bump the storm track farther north into Canada with Washington on the southern edge. For CA we have sunny skies and warmer temperatures with highs into the 50s for Thursday into the weekend. The models still show some breezy west winds Thu - Fri with ridgetop gusts to 30+ mph.

The ridge starts to slowly shift west over the coast this weekend with temperatures cooling a few degrees but still in the 50s at lake level and 40s for the upper elevations.

The retrogression of the ridge continues next week. Early in the week it is forecast to shift just off the coast which may cool temperatures a few more degrees with highs possibly dropping into the 40s. 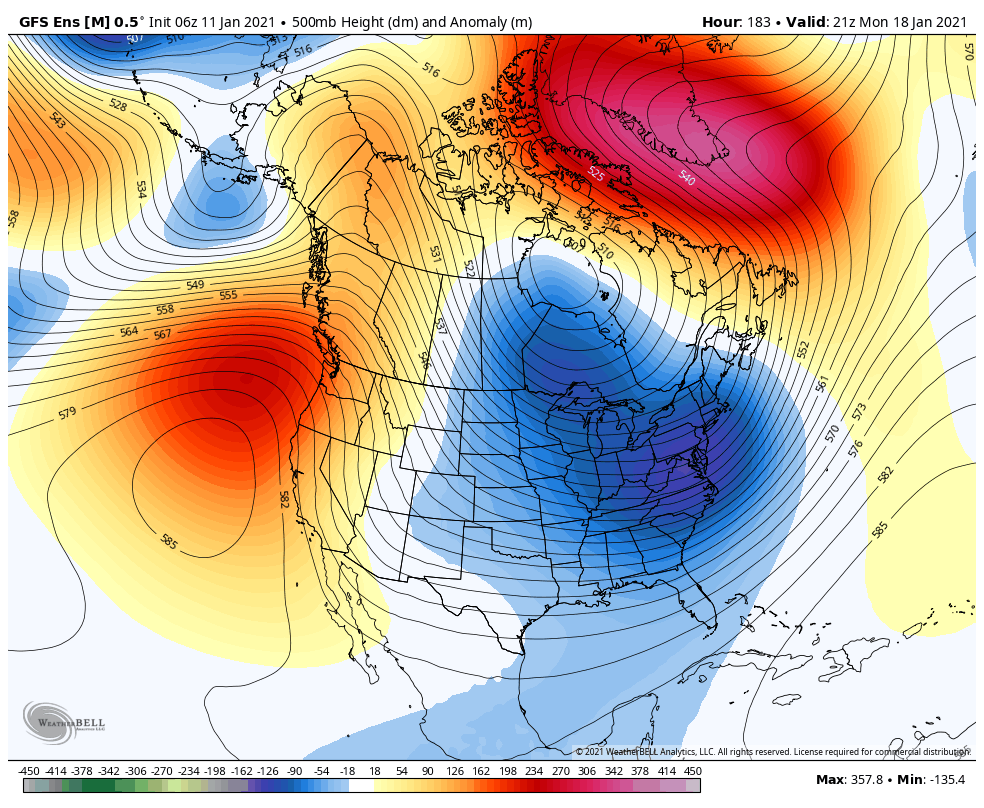 The ridge continues to shift west for the 2nd half of next week, possibly allowing even colder air to push down from the north. 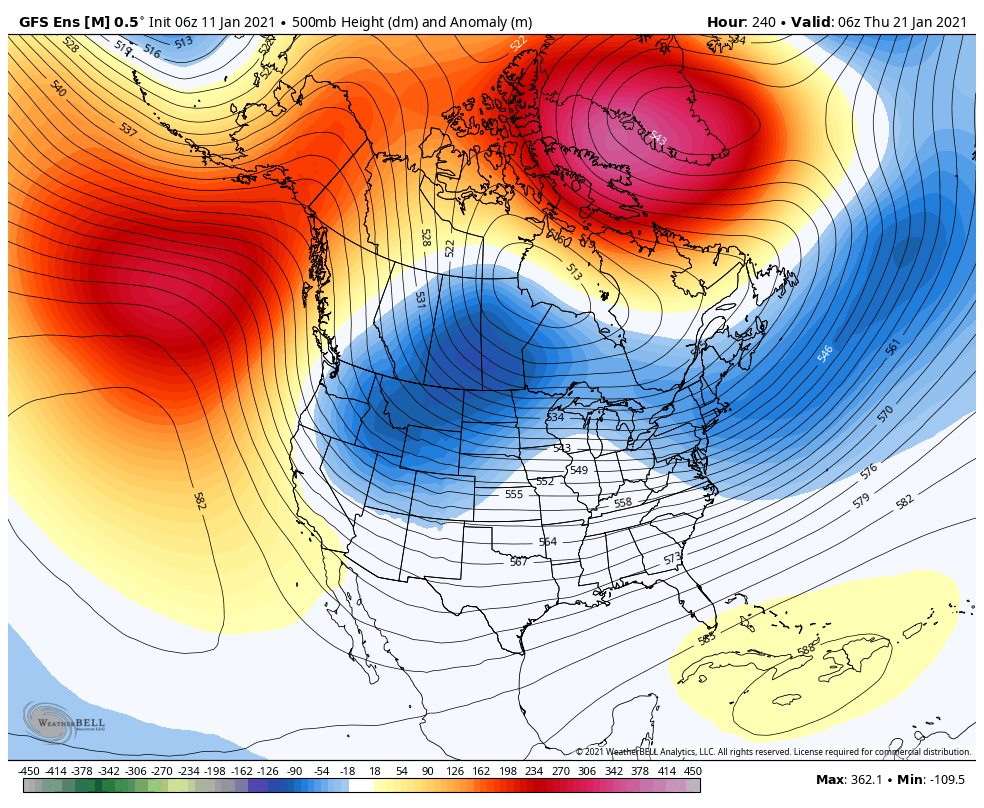 The forecast models have been in good agreement for a while now on the pattern shift starting around the 20th. We see good agreement on a flip to a negative PNA pattern that then continues into February.

The retrogression of the ridge farther out into the Pacific is forecast to continue until it may find a home by the 25th south of the Aleutians, and hopefully the trough finds its home for a while over the West Coast. 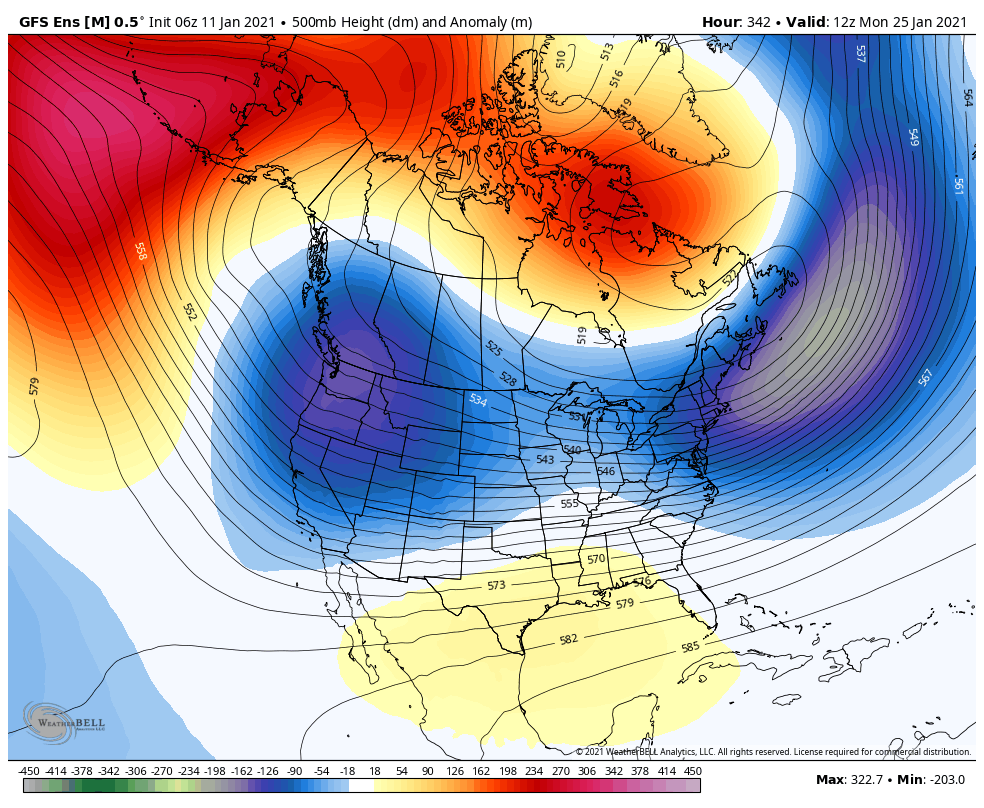 It is possible that we start to see some dry systems trying to track down from the north after the 20th, and then by the 25th, the pattern may open up enough for some wetter system to track into CA. The long-range models show a shift from below-average to above-average precip chances for the last 7 days of the month. 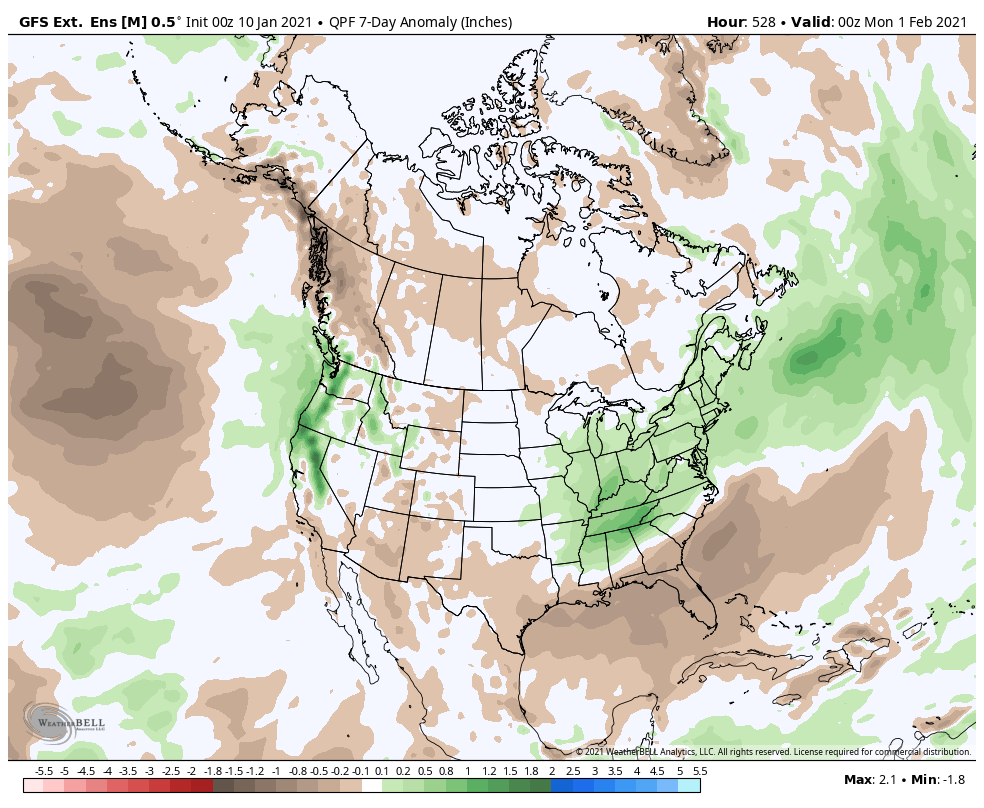 It is not guaranteed that we see storms, but if the pattern forecast continues to hold, the storm door should start to open after the 20th, and open more after the 25th. The good news is that the pattern we are forecast to see by the 25th, is also forecast to hold through the first 2 weeks of February. 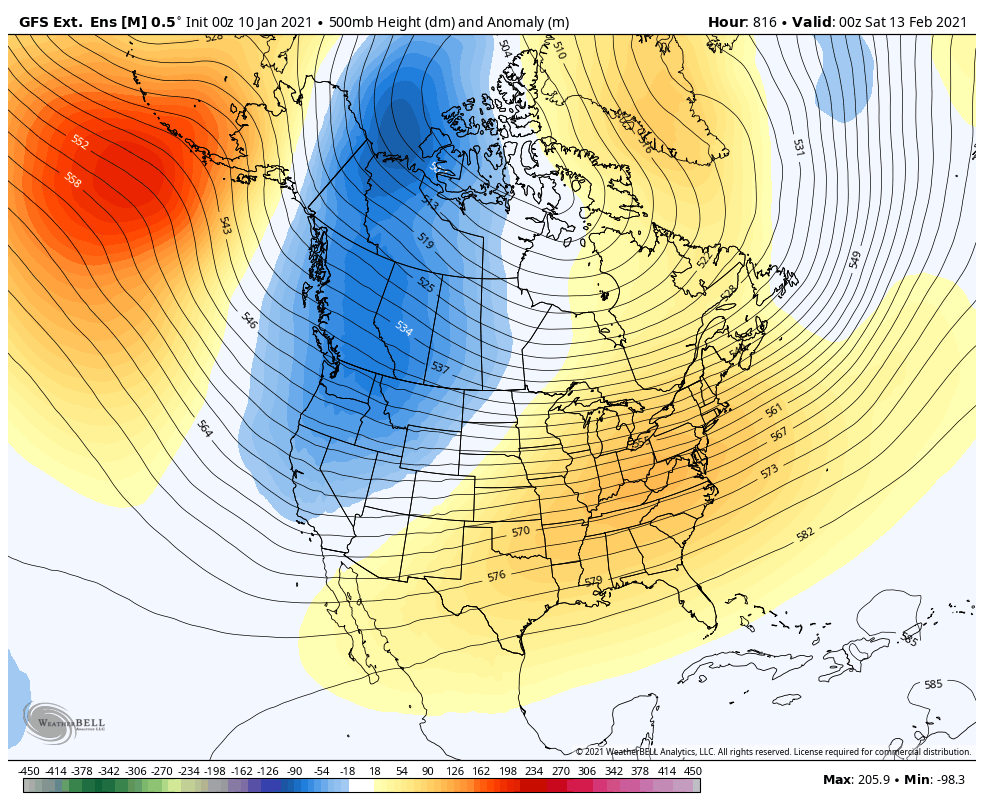 That is off of the GFS extended ensemble mean model. It will be interesting to see if the new European weelies model run that comes out today agrees. Some positive signs that winter could return or maybe START later in the month and into February. Keep the hope...

We get into a discussion on the Polar Vortex and how that may be involved in the long-range weather patterns on the latest episode of The Flakes Podcast that came out today. The link is below in the announcements.

P.S. If you are reminiscing, remember what it looked like out the window on this day in 2017? I'll remind you with a picture sent in by a reader... 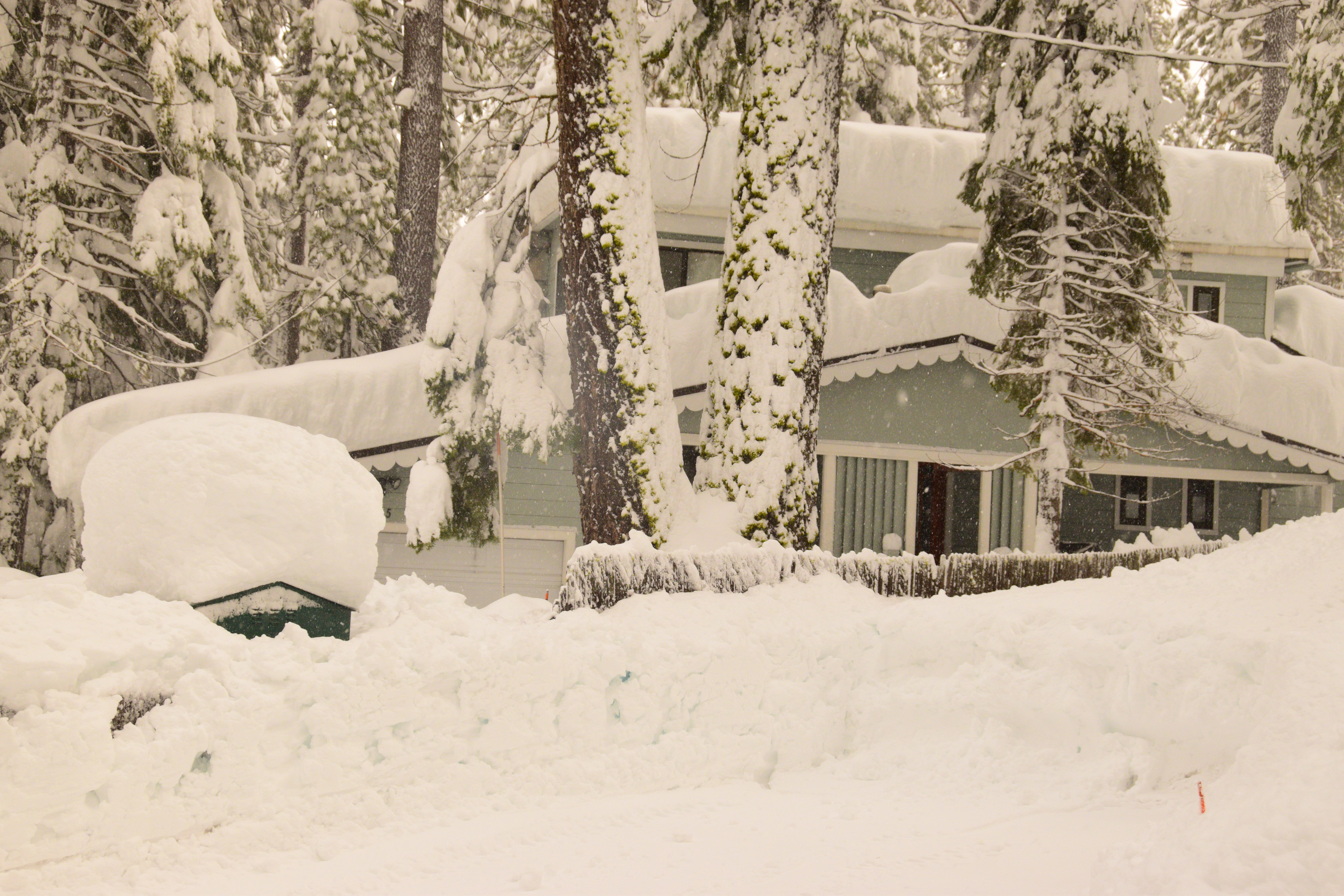 Send in more pictures if you have them of dry or snowy pics from the past for this week. [email protected]

The dry spell will give you plenty of time to listen to episodes of The Flakes Podcast. On this week's show, we talk about the snowfall reports for each ski region, where we stand for snowfall and what history has shown, the Polar Vortex & its effect on our weather, and how snow could bring back the happy vibe.

Listen below via Spotify or wherever you get your podcasts.