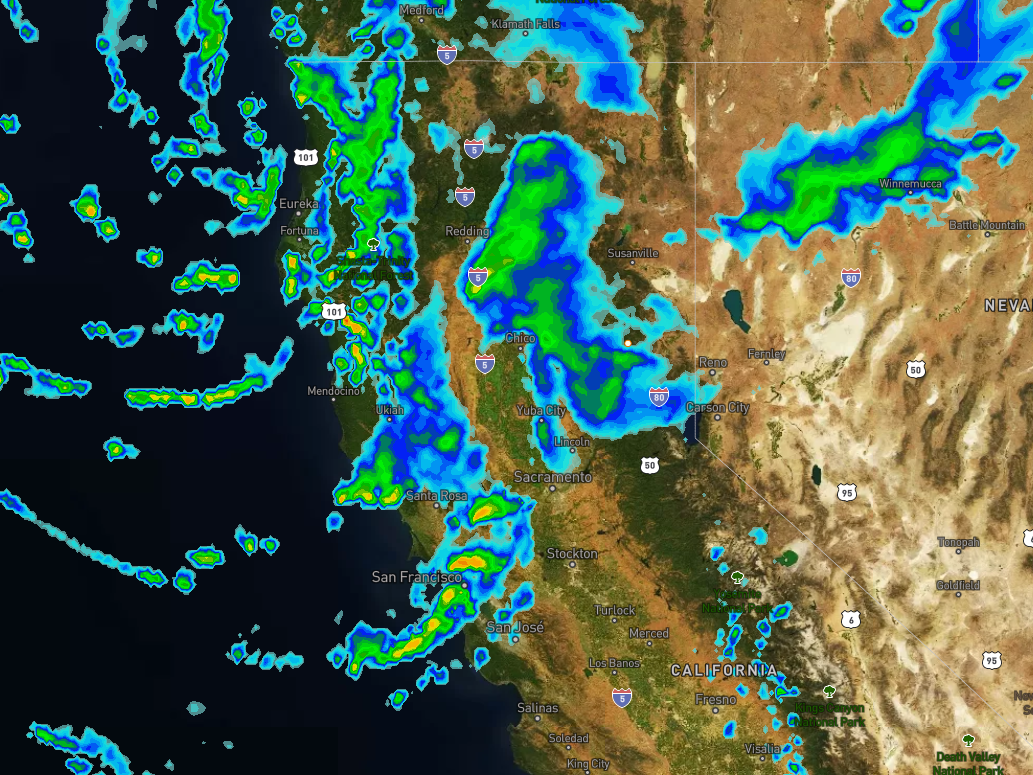 Scattered rain & snow showers Friday with snow levels rising. Friday night into Saturday morning a cold front moves through with light snow, then clearing for Saturday afternoon. A drier & milder pattern for Sunday into early next week. Then a cooler & slightly more active pattern is possible later in the week.

So far the forecast is going as expected. We saw scattered light showers Thursday afternoon through the overnight hours. That brought a dusting to an inch of snow to the mountains. The scattered showers will continue today (Friday). Then tonight a 2nd wave will bring colder air & light snow. We can see the ball of clouds approaching the West Coast this morning.

Here is a look at the snowfall reports so far. We were expecting a dusting to an inch of snow through this morning on the mountains. We saw that for most mountains around the lake, but it's been drier so far to the south of the Tahoe Basin. 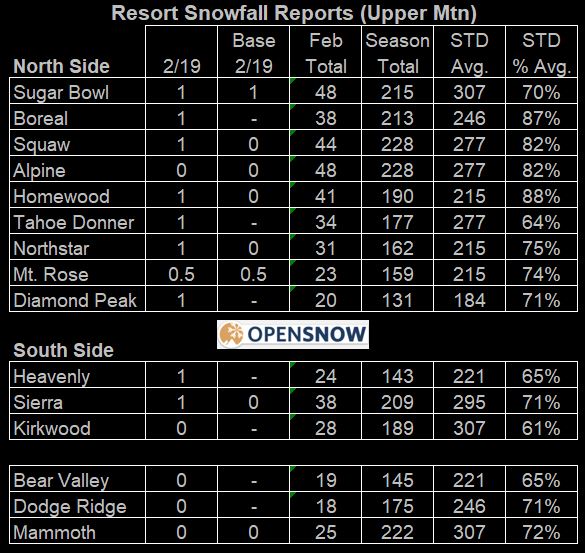 Snow levels are starting out near lake level early Friday morning, but they will rise through the day peaking out around 7000-8000 feet by midday. Then starting to fall slightly by evening. The problem with very light and scattered showers is that the snow levels can be as high as the freezing levels instead of up to 1000 ft. below the freezing levels during steady precipitation. That is why during drizzle snow levels can be higher than forecast or you were expecting.

The winds are gusting up to 60+ mph over the ridges this morning, and they may increase up to 80+ mph today at times as the next wave approaches with colder air and a tightening gradient. Expect a wet and windy day for Friday with scattered showers and highs snow levels. We could maybe see another coating to an inch of snow above 8000 ft. mainly west of the lake along the crest.

Then Friday night a wave of steady precipitation finally moves in. Our forecast radar is showing the light-moderate snow starting to move in northwest of the lake around midnight. 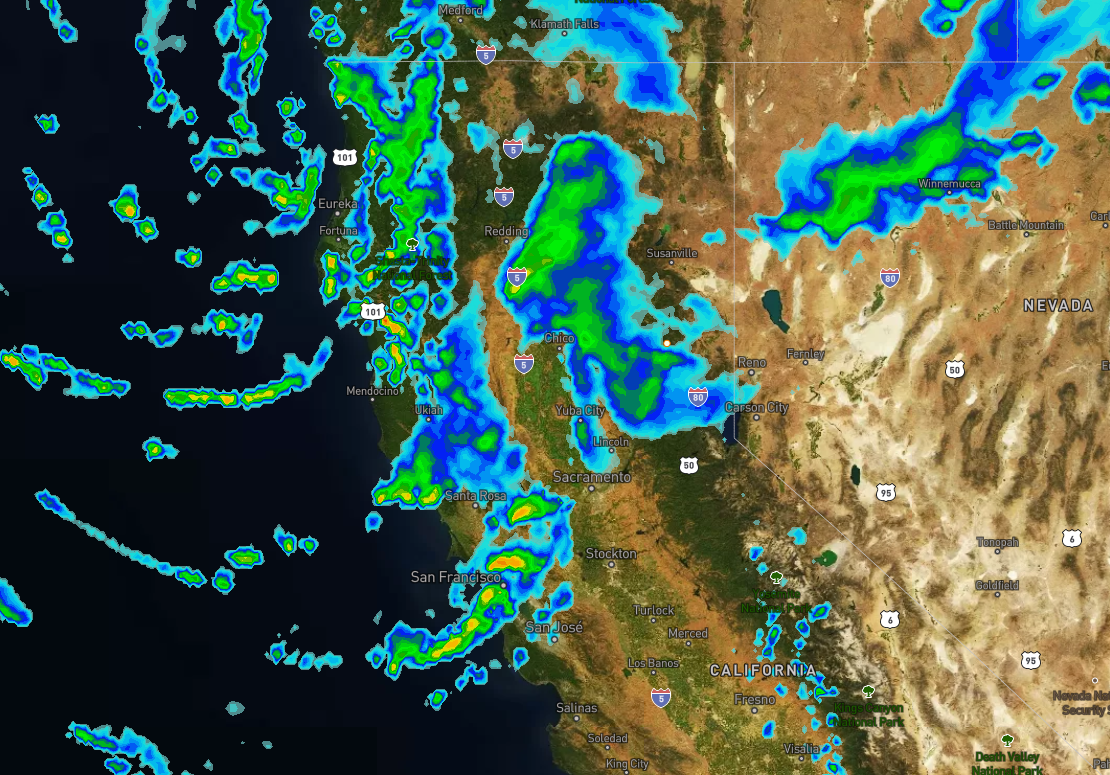 The models show the steadiest snowfall and accumulations during the early morning hours Saturday, and then clearing out quickly by late morning. Snow levels are around 6000-6500 ft. this evening, but fall quickly below 5000 ft. with the steady snow moving in, and below 4000 ft. by Saturday morning. Snow ratios tonight on the mountains increase to 1215:1. So we could see a drier snow start to accumulate by Saturday morning.

Total precipitation amounts on the latest model runs have continued to increase slightly, and we see really good agreement among the models this morning which is good. The range for high-end amounts along the crest is 0.4 - 0.5 inches of total precipitation, only a range of 1 tenth. The average is 0.47 inches with the heaviest precip along the crest down to just barely Kirkwood and fading farther south. Up to 0.35 inches to the east side of the lake. 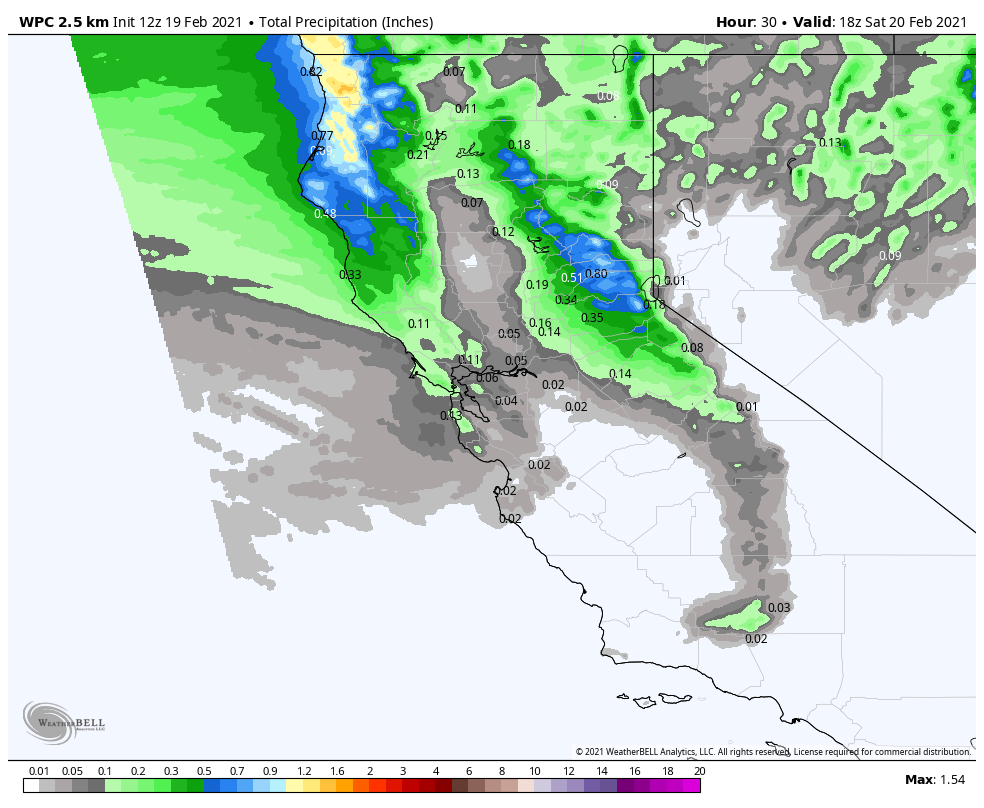 The final forecast for this storm put out Thursday morning had a high end of 5 inches along the crest. We already have an inch reported this morning. The updated snowfall forecast has increased 1 inch, but actually two inches since we already saw 1 inch. You can do the math yourself: an average of 0.47 inches of precip along the crest x an average snow ratio of 13:1 at 8k = 6 inches. Here is the updated snowfall forecast through Saturday morning. 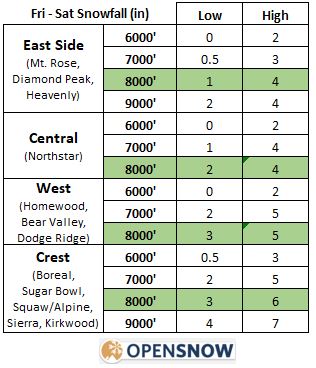 Dodge Ridge & Bear Valley should look at the low end of the forecast as the system weakens to the south of the Tahoe Basin, more in the 1-3 inch range. The gusty ridgetop winds drop-off Saturday and the sun should come out by late morning into the afternoon. It's cold with highs in the 30s and 20s above 8k. If we see the higher end of the forecast with some drier snow at the end, it could be a nice refresh of the slopes and a fun day of skiing.

High pressure builds in over CA Sunday through Tuesday. We should see mostly sunny skies and lighter winds throughout the period. 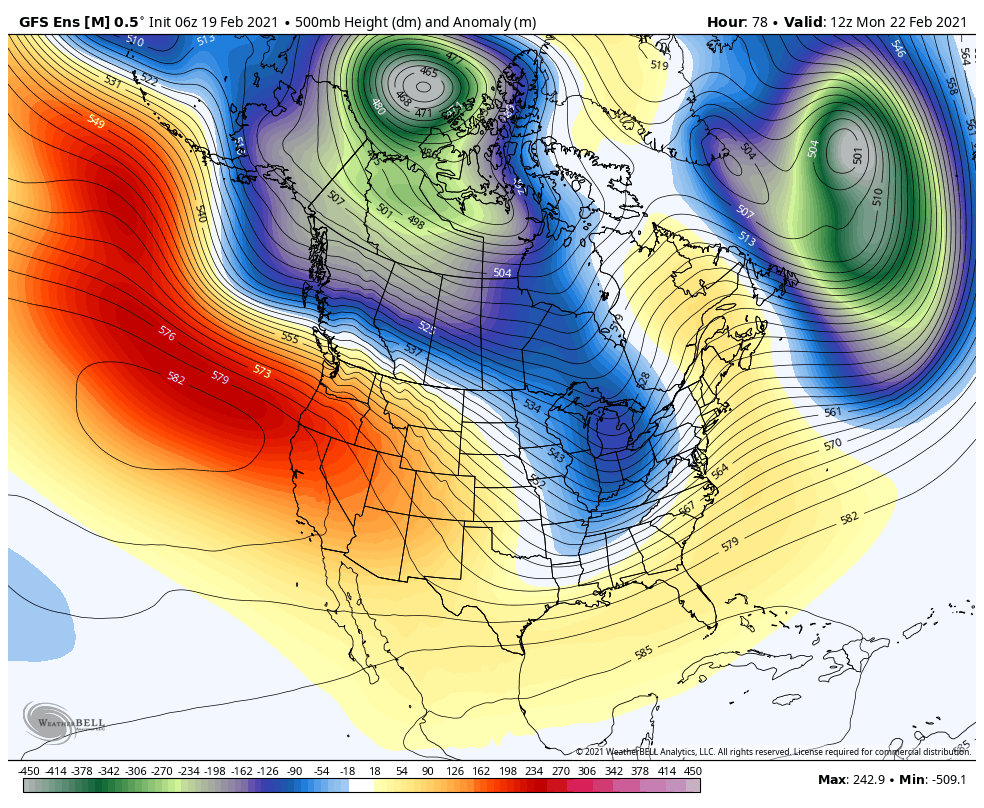 Highs warming into the 40s at lake level Sunday, and then 50s Mon - Tue, with 40s for the upper elevations. That will bring us some nice days with mild temps and soft snow.

We are still expecting a slight shift in the pattern to begin by Wednesday with the ride shifting off the coast and a cold trough digging south into the Western U.S. 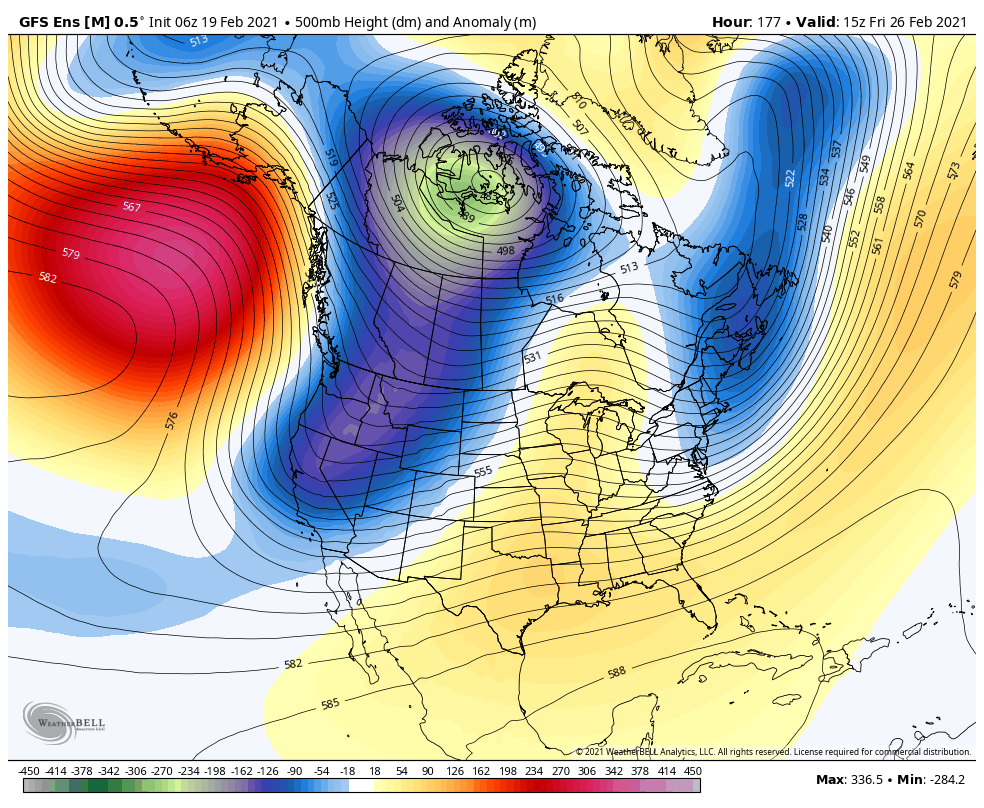 Unfortunately, the ridge doesn't back far enough away from the coast for the trough to dig a bit farther west off the coast. So the storms won't be able to track south off the coast and pick up moisture. We will see cooler air start to filter in from a dry cold front Wednesday with highs dropping back into the 40s at lake level into Thursday, but we should stay dry.

Then by next Friday, we could see a 2nd system drop down from the north and possibly a 3rd next Saturday. Each could bring some colder air, gusty winds, and light snow. 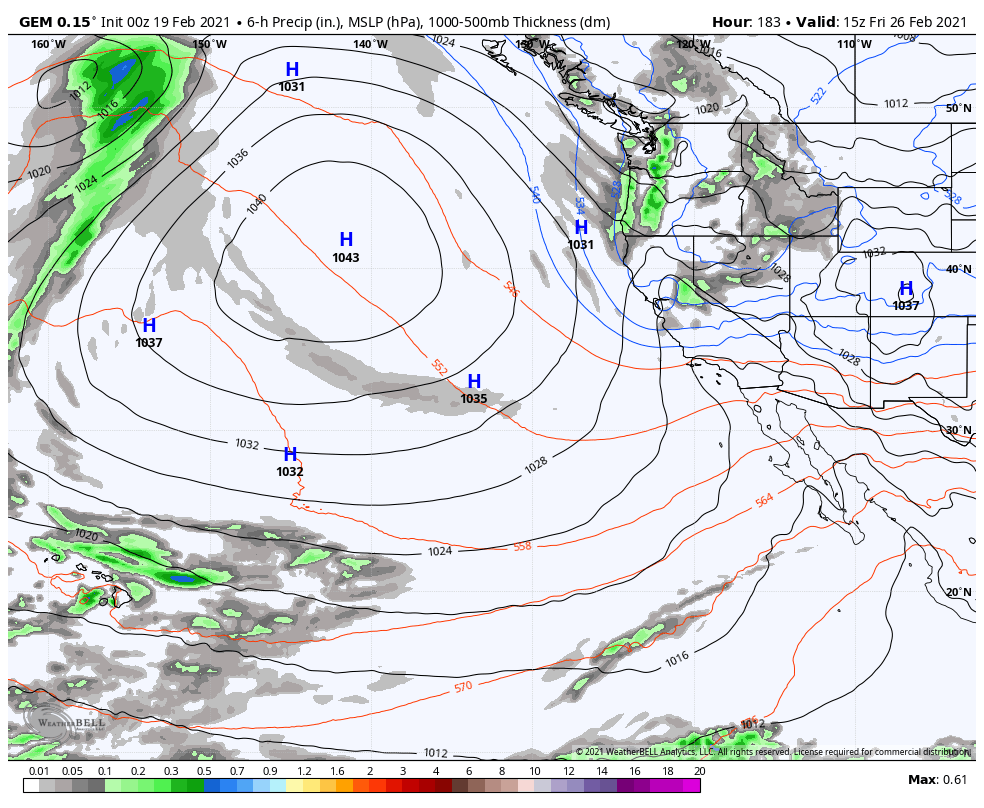 We will be keeping an eye on those systems all week. They look insignificant, but they will be our only chance at seeing fresh snow over the next 10 days after the small system that moves through tonight.

The long-range models have the ridge just off the coast through the long-range. That will make it hard to see anything more than weak systems into the first few days of March.

The models have been suggesting high pressure builds in over CA through the 2nd week of March over the last several days, but I have been cautious to not mention that in the forecasts because I have been looking at some signals that we may not have a completely dry pattern. The GFS & GFS extended ensemble models are now starting to show the possibility of a trough digging down the West Coast the 2nd half of the 1st week of March. 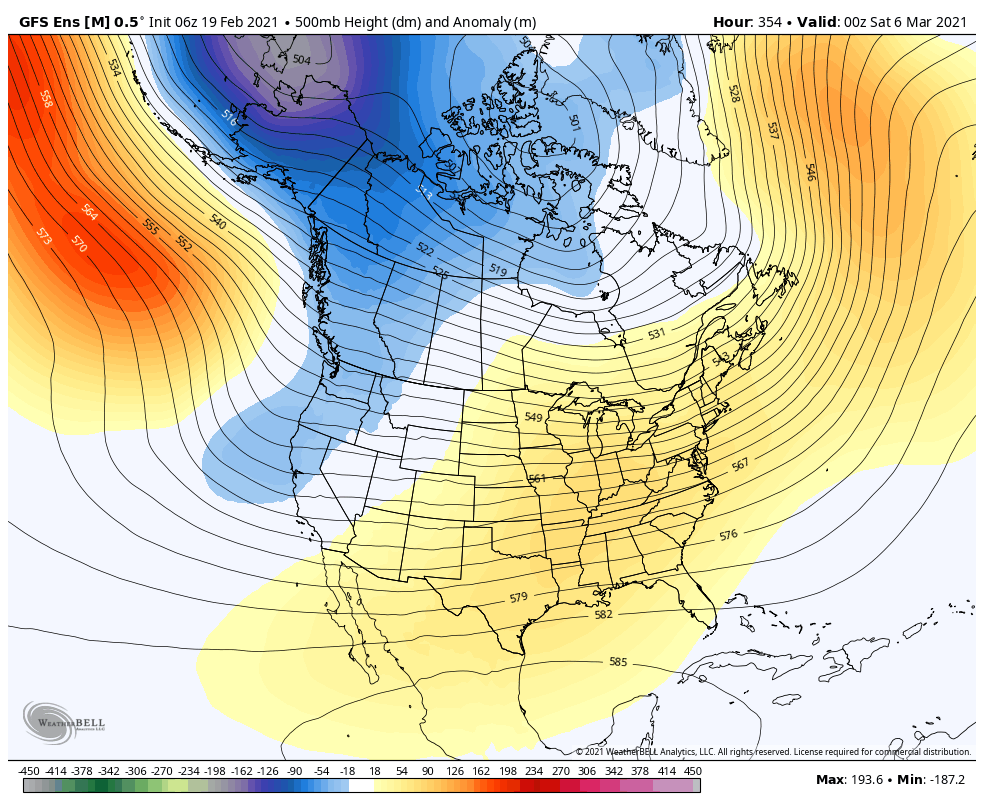 The other models still aren't showing this yet, but their ensemble mean runs show increased precipitation for the northern Sierra during that time. That means that some of their ensemble runs are seeing the potential that we are not completely dry through the first week of March and could see some systems. That only makes me less confident this morning that we stay dry, but not confident yet that we see an active pattern either.

We will continue to watch the trends as we get closer. Several of the teleconnection patterns are flipping from where they have been most of the winter, and we are heading into meteorological spring where the pattern tends to become more progressive as we go through March. It makes long-range forecasts more difficult. March is one of our wetter months on average, so plenty of time to get some good storms. The hope lives on...

A new episode of The Flakes Podcast is out! This week we talk to Powder Chaser Steve about top chases this season & being stuck in Interlodge at Alta/Snowbird along with several members of the OpenSnow team. Plus we go through the 5-day snowfall reports & forecasts for each ski state! 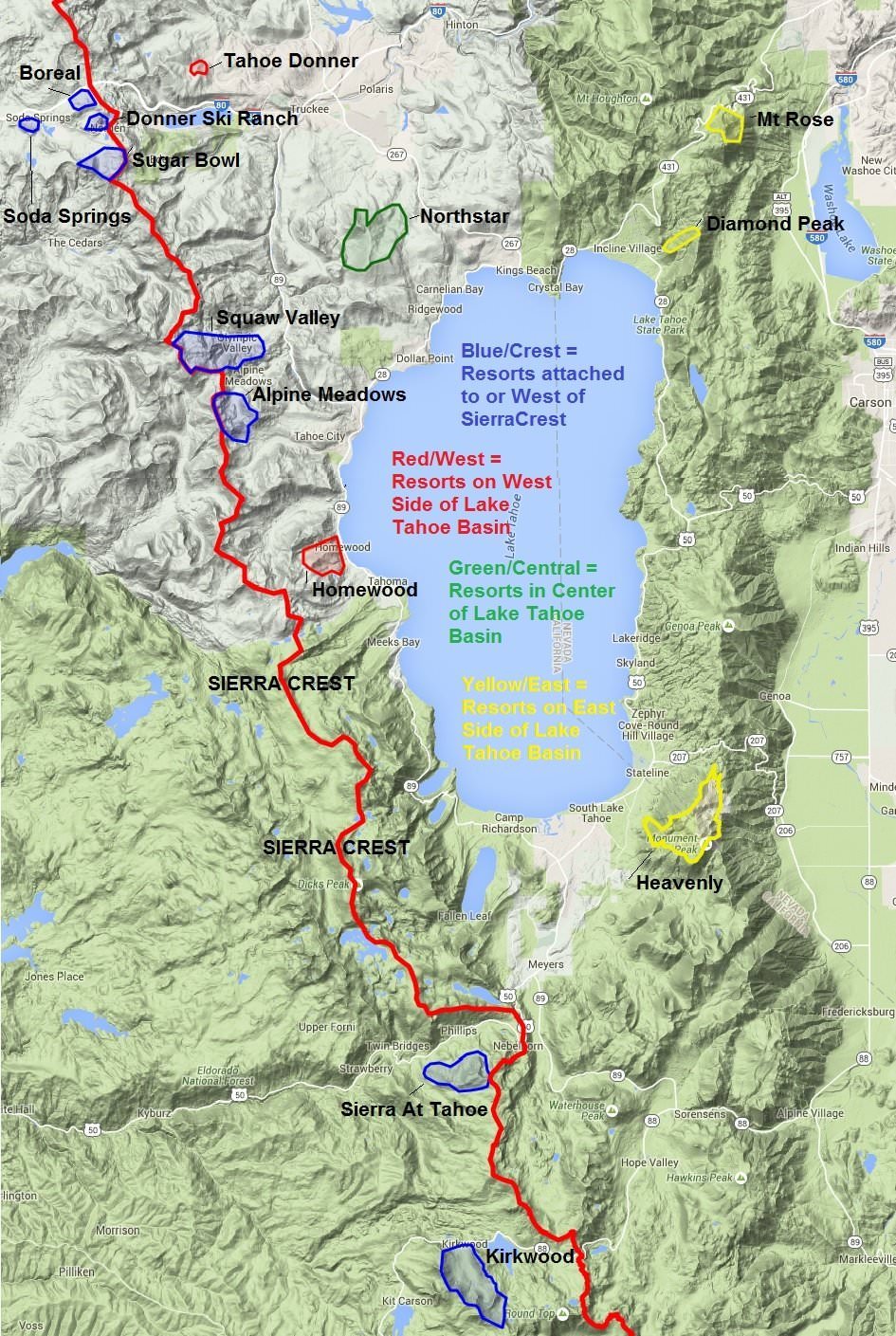