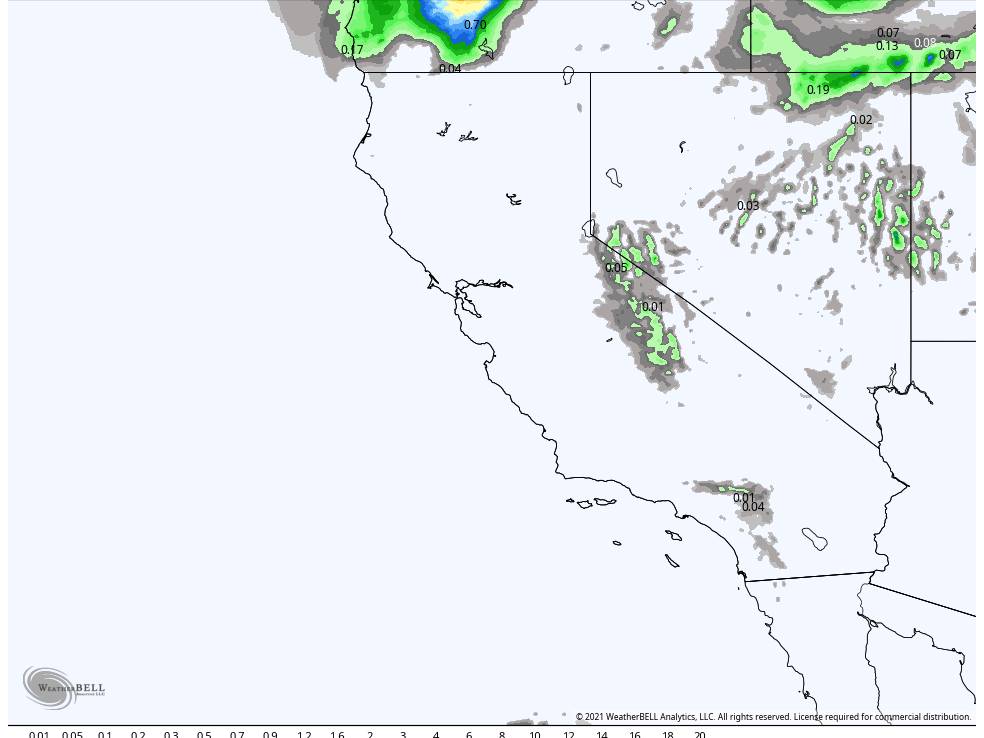 We have a dry pattern through Friday. We will cool down Wednesday. Then warm back up slightly Thursday into Friday before cooling down again Saturday. We could see light snow showers Saturday. We may see a couple of storms during the first week of March.

The dry and sunny weather continues through Friday. We have highs in the 40s for Tuesday and then dipping into the 30s Wednesday behind a dry cold front. Then we warm back into the 40s Thursday into Friday. Winds will be breezy with ridgetop gusts up to 60+ mph at times through Wednesday from the north/northeast. Then turning west and gusting 30-40+ mph Thu-Fri.

The next trough digs into the West Saturday bring another shot of colder air. Highs dropping back into the 30s at lake level and 20s for the upper mountains. 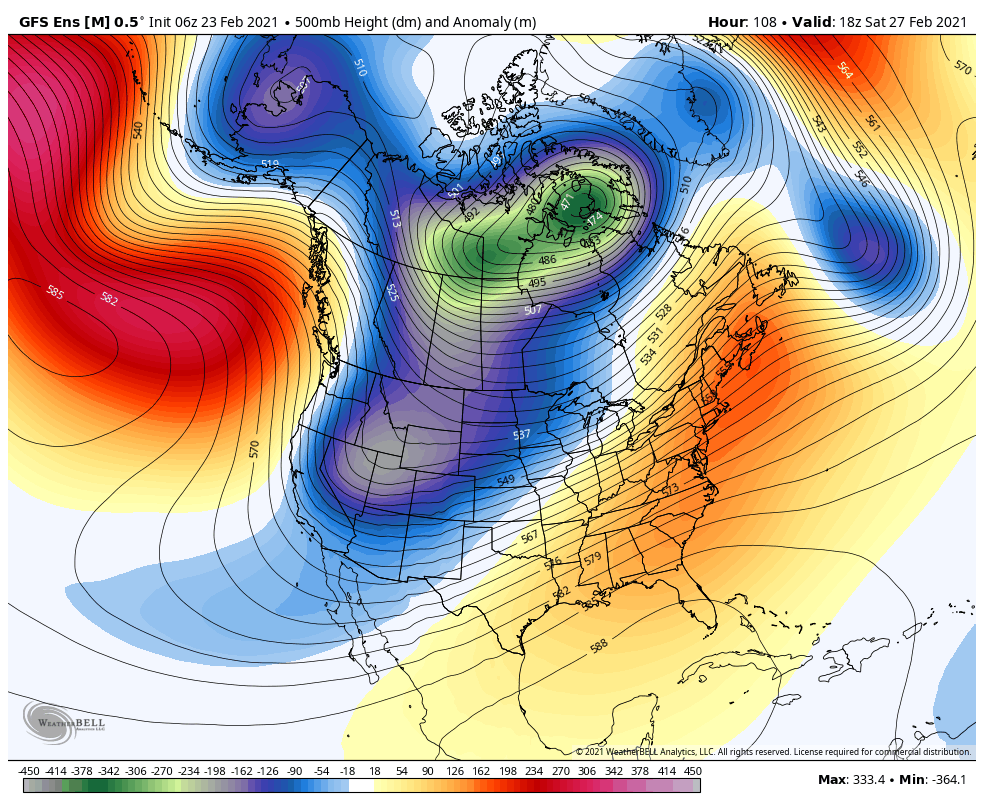 This system will be sliding down to the east of the Sierra. The forecast models still suggest there is enough moisture for a few scattered snow showers on Saturday. 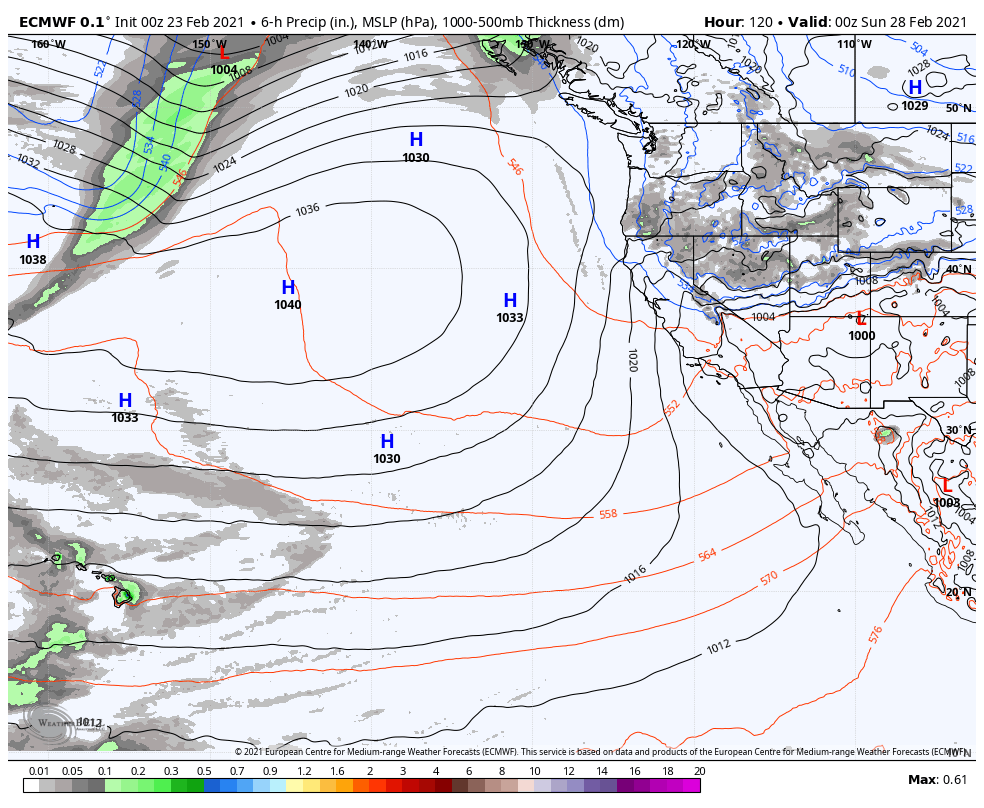 The total precipitation amounts look to be very light with the best chance for an inch or two of snow being south of the Tahoe Basin in the central Sierra. We may just see scattered snow showers along with some sun and maybe a dusting of snow on the mountains. The best chance being on the east side of the lake. We will continue to keep an eye on it. Sunday we should see mostly sunny skies with highs warming back into the 40s at lake level.

The forecast for next week looks like it is going to be frustrating. We may have two systems to track, both of which could be closed lows that will track south somewhere between well off the coast and down through CA. Some model runs show the lows stalling off the coast before moving inland.

That is going to make the timing, track, and precip forecasts for each system tough to forecast. We usually go into cut-off low season in March, but not usually right away starting the first day... The Europen model is farther off the coast with the first system Monday-Tuesday and other models including the GFS have the system tracking down closer to the coast or even over CA. 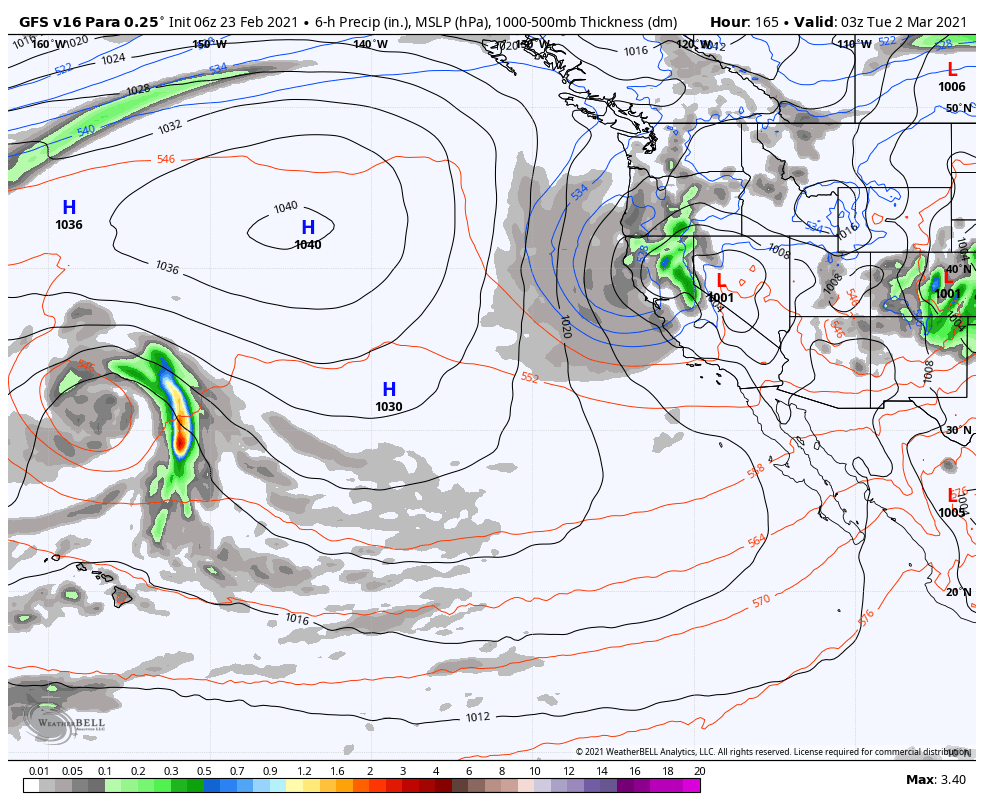 The difference is no precipitation at all or several inches of new snow. The next upstream system for later next week could bring similar headaches with the track. Some model runs like the European model track the system south off the coast and then inland well to our south, and others like the GFS have a track down the coast. 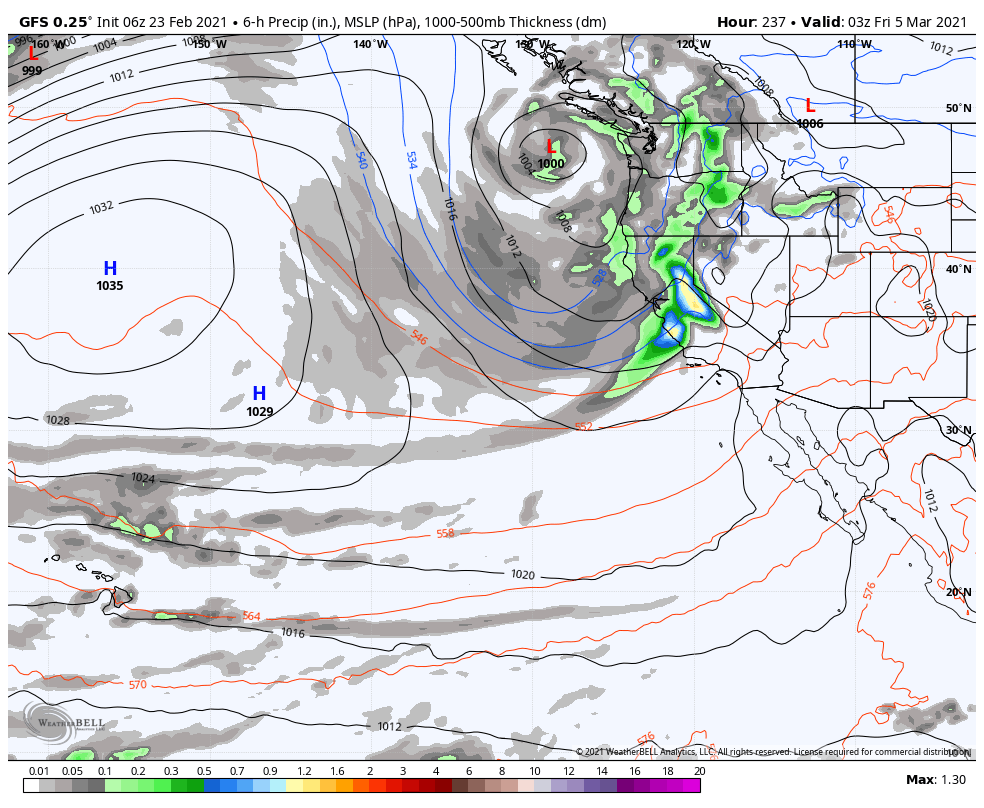 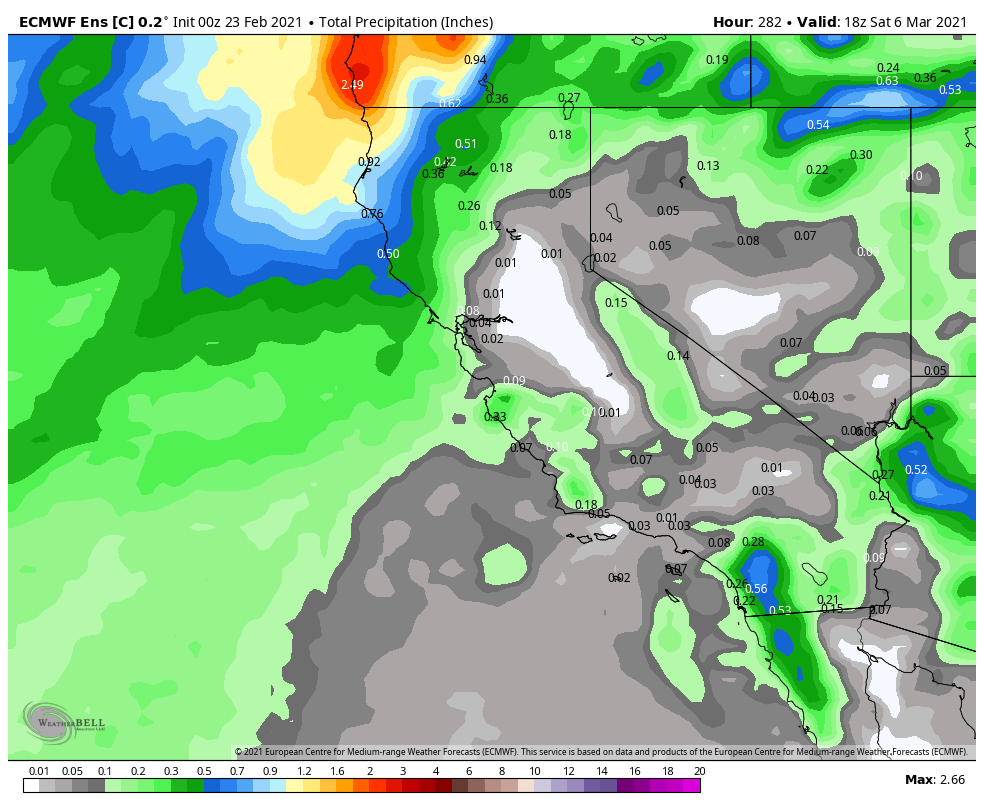 ...and the GFS ensembles show the higher-end scenario with both systems track down the CA coast with heavier precipitation and snow. 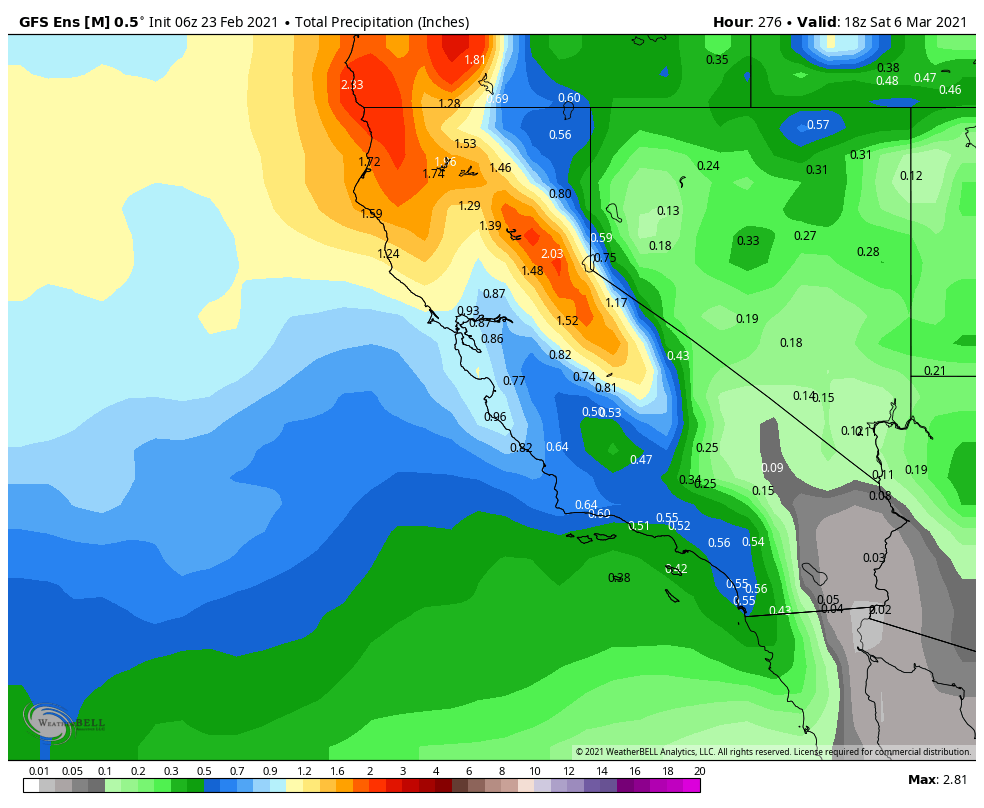 Cut-off low season is never fun to forecast. The long-range models suggest that lower heights continue over the West into the 2nd week of March and throughout much of March. 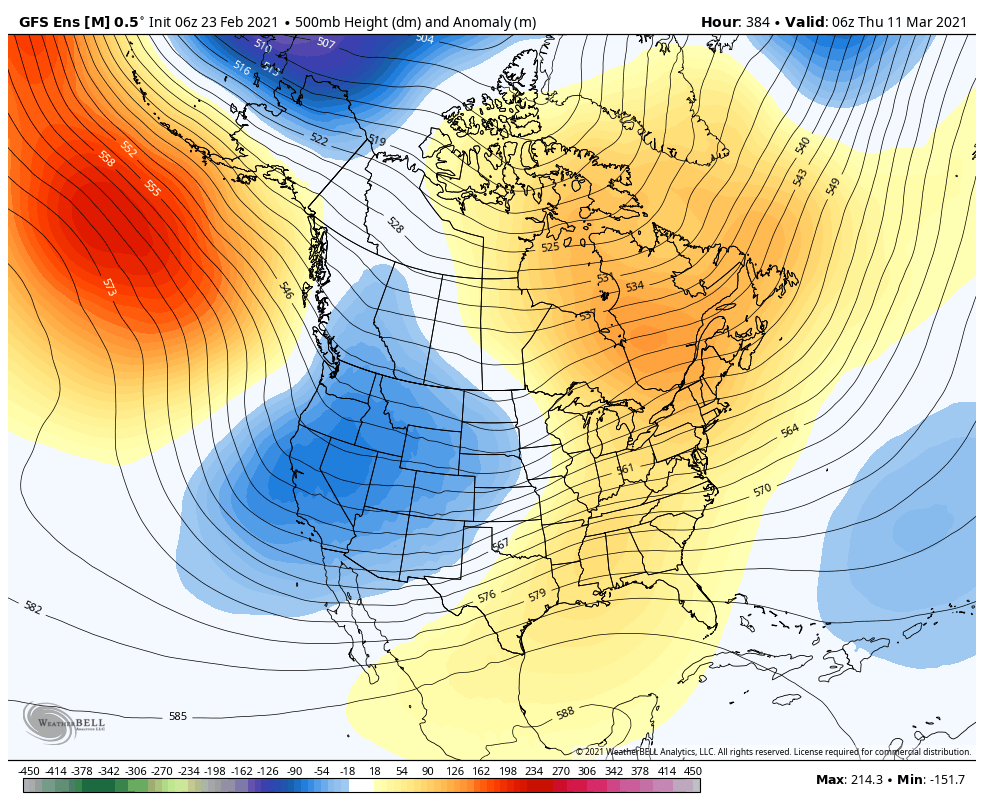 We may see a mix of cut-off lows and systems that sweep through and help to push some of the lows inland. Overall, it looks like we could get going into a somewhat active pattern starting next week. But to get big snows we will need each storm to track just right, and forecasting those tracks is going to be a pain. We will likely not be able to nail down the tracks until we get within a few days or less of each system.

The new episode of The Flakes Podcast is out this morning!

This week we talk to Evan Thayer about the amazing skiing after Interlodge at Alta, and having respect for ski patrol. Plus we go through the 5-day snowfall reports & forecasts for each ski state!

The data will update daily, around 20z (12 PM Pacific), with the latest available information. The delay in updating to the early afternoon is due to the accuracy of the data being improved each hour after it’s initially available at 14z (6 AM Pacific).