The next storm moves in by Saturday afternoon and lasts into Monday before clearing. Snow levels will fluctuate and start high before coming down Sunday into Monday. Gusty ridgetop winds through the period. We could see a break Tue-Thu. The next storm could move in Friday the 9th.

The winds are picking up and moisture is beginning to stream in Saturday morning along with some warmer air. We have an interesting setup that is going to make the forecast tricky but I'll try my best to break it all down for you.

First, I have to post the final snowfall reports from the Thursday storm after it took 24 hours to get the final numbers. About half of the ski areas adjusted their reports, with most lowering the totals a little. Here are the final numbers, 14-25" for the storm, and where we stand so far this season as the next storm is moving in. 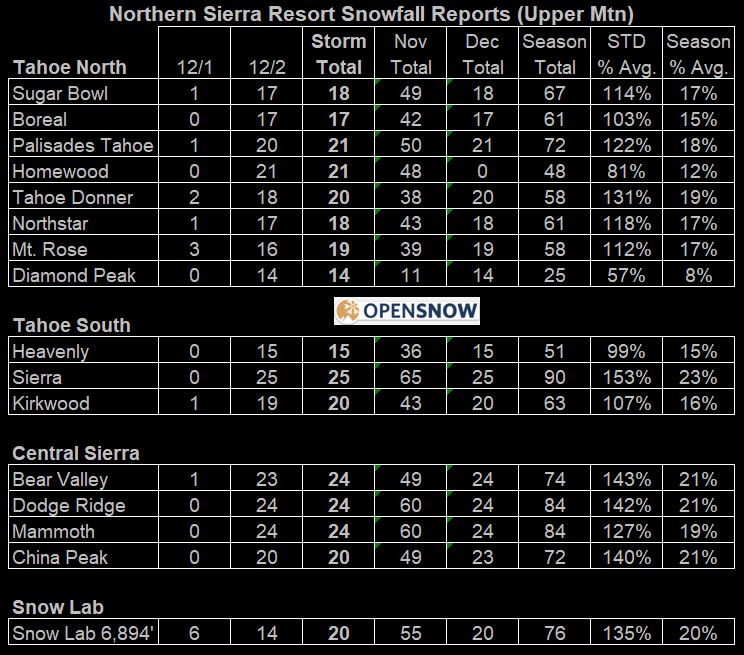 The forecaster scorecard is much cleaner this morning as well. Most if not all ski areas picked up my final forecast amounts from before the storm on Wednesday morning. The 4 that reported below the forecast range are up along the Sierra crest and were most impacted by the extreme winds gusting up to 120+ mph. 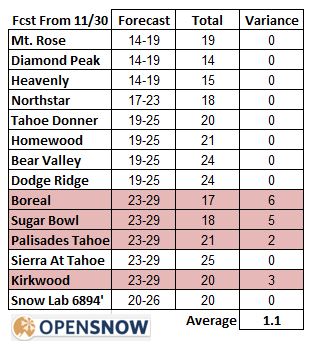 Overall we picked up a couple of tenths less precipitation than the model average suggested before the storm.

Ridgetop winds Saturday morning are already gusting up to 60-70+ mph which is likely going to affect some upper mountain lift operations for the day. We have a cold storm spinning off the coast that is drawing warmer moisture up from the southwest ahead of it into CA and the Sierra Saturday.

Not much is showing up on radar yet but we do have some snow showers and some rain falling on the mountains to the west of the lake to the south.

The freezing levels can be the snow levels when we have light precip and drizzle, so we are seeing some rain near 7000 ft. along the crest. Eventually, the colder air will get pushed out and freezing levels are forecast to rise to around 8000 ft. over the lake by Saturday evening. With heavier precip, the snow levels can be dragged down around 500-1000 feet below the freezing levels. So snow levels could be between 7000 - 8000 ft. around the lake by afternoon through Saturday evening as the heaviest precip is falling. Maybe a bit lower at times under the heaviest bands, especially along the crest.

That means for Saturday you can expect some lower elevation rain and higher elevation snow along with gusty southwest winds up to 70+ mph at times over exposed ridges. Not a very nice day for skiing. Snow levels fluctuating between 7000 - 8000 ft. depending on the precip intensity.

Looking at our forecast radar we can see a distinct gap in the precipitation during the early morning hours Sunday between about 2-5 AM as the warmer moisture plume shifts southeast out of the region and the moisture from the cold low off the coast begins to move inland.

This low is going to move slowly from Sunday through Monday. On the east side of the low through Sunday the snow levels come down but not a lot. They should drop to between 5500 - 6500 ft. by early Sunday which is near lake level. By Sunday morning the snowfall amounts at lake level should only be 0-3 inches from east to west and 7-18 inches on the mountains depending on elevation. The highest amounts are above 8000 ft. west of the lake along the crest, especially southwest of the lake near Sierra and Kirkwood.

Sunday will feature gusty southwest winds again up to 70-80+ mph over the exposed ridges, which could close some upper mountain lifts again. Another storm day with waves of precipitation moving through as the low spins over northern CA. Sno could stop at times and then be heavy at times. The snow levels should drop to between 5000 - 6000 ft. by the end of the day. So mainly all snow is expected through the afternoon. 3-10 inches possible during the day.

Sunday night through Monday the waves of moisture could continue to rotate through but they are expected to be much more scattered and lighter. The winds could still be gusting up to 40+ mph over the ridges at times. Highs dropping into the 20s on the upper mountains and low 30s at lake level. Snow levels may fluctuate between 4000-5000 ft. through Monday. Well below lake level. 1-4 inches of additional snowfall is possible.

The latest model runs this morning are in better agreement with total precipitation amounts through Monday. Most have a range between 2.0 - 2.8 inches along the crest and 1.5 - 2.0 inches spilling over to the east side of the lake. The highest amounts south of the lake with the warmer half of the storm and the north side with the colder half, but similar amounts north to south in total. The GFS is wettest with over 3 inches along the crest this morning.

The total model average is around 2.7 inches along the crest, up from 2.3 inches last two mornings. Here is a look at the WPC's blended model showing close to the average through Monday. 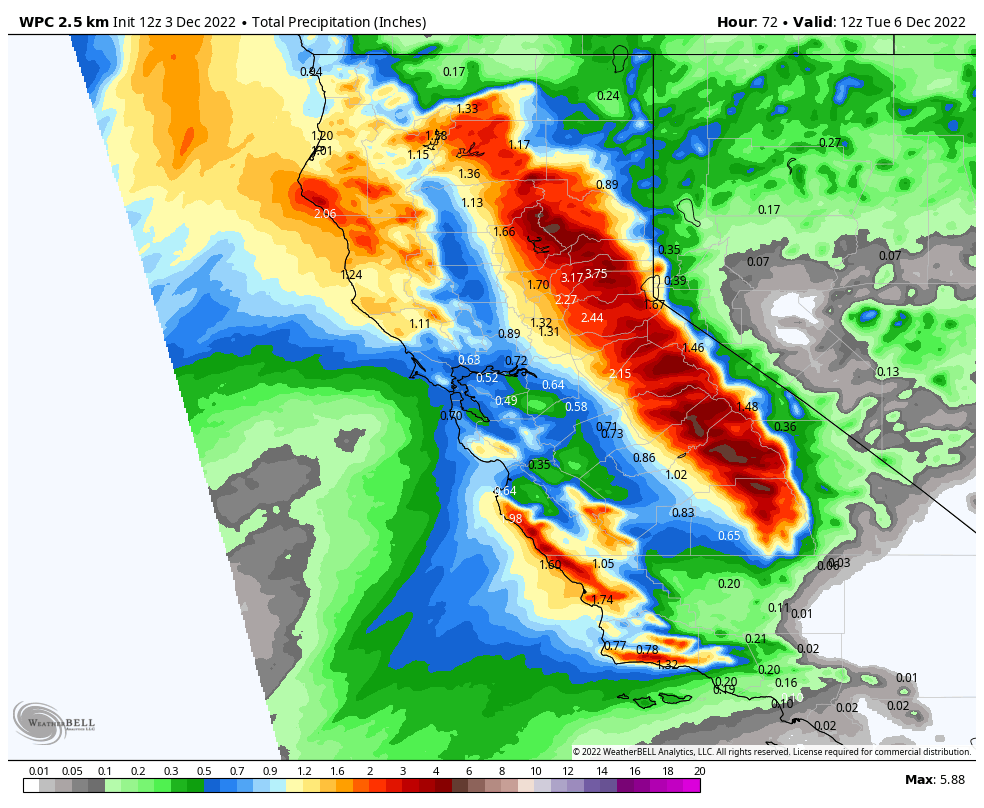 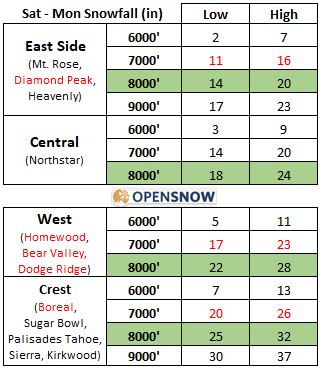 This forecast is such a pain that it took me over 3 hours to calculate the snowfall this morning. Grrr... Now all I can do is sit back and watch for 3 days and hope the totals reported Tuesday are within or above my range.

We should see mostly sunny skies and lighter winds starting Tuesday and lasting into Thursday. Thursday winds could start to pick up ahead of the next storm. It stays cold with highs in the 30s at lake level and 20s for the upper mountains.

The next storm is still on track to move in Friday the 9th. 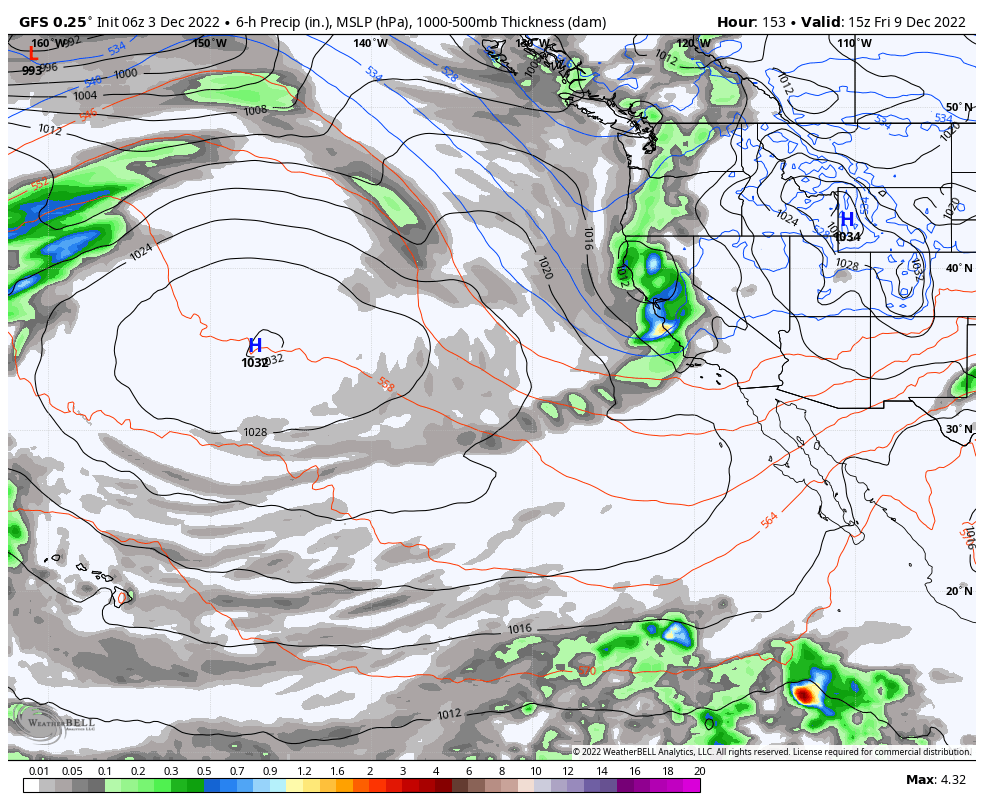 Some of the European model runs are starting to show this system falling apart as it moves into CA. So still not a lot of confidence in this storm. We'll continue to watch the trends all week.

Beyond Friday there is low confidence in the pattern. The long-range models are trying to put troughs on both coasts with a coast-to-coast storm track and most of the U.S. in a cold pattern. 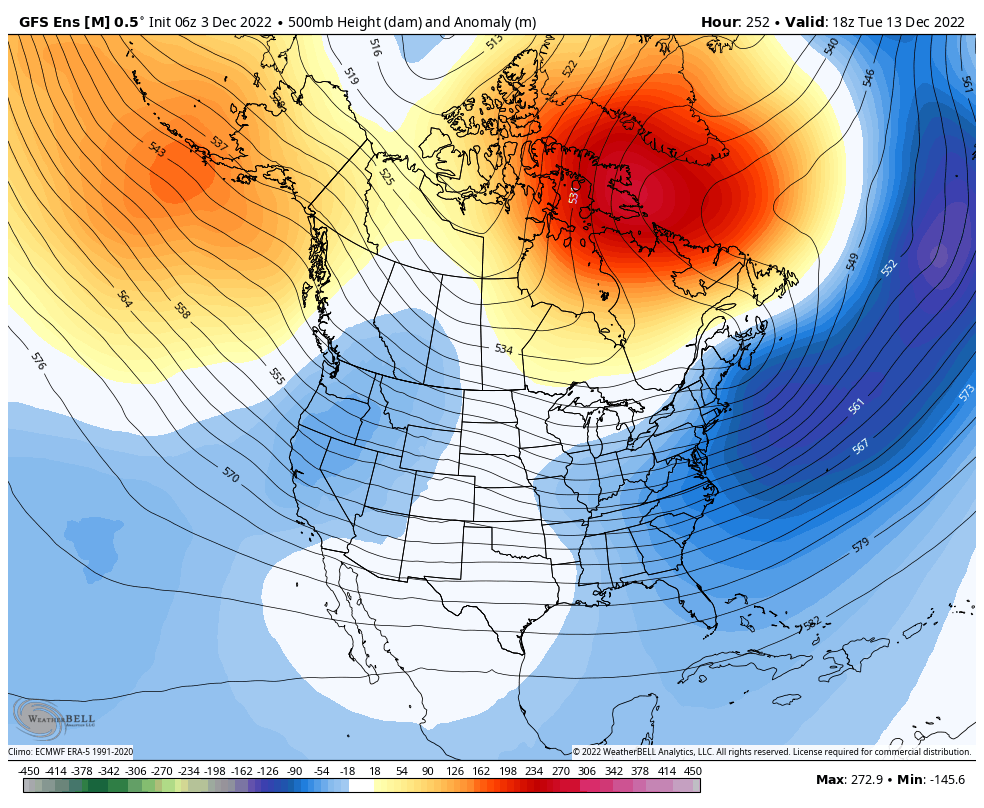 The fear is that we could be on the southern edge of the West Coast storm track which means we could stay active, see weaker storms, or stay on the drier side.

My bigger fear in this pattern is that beyond mid-month we could ridge up and dry out as the trough settles in over the East under the ridge stuck up near Greenland. 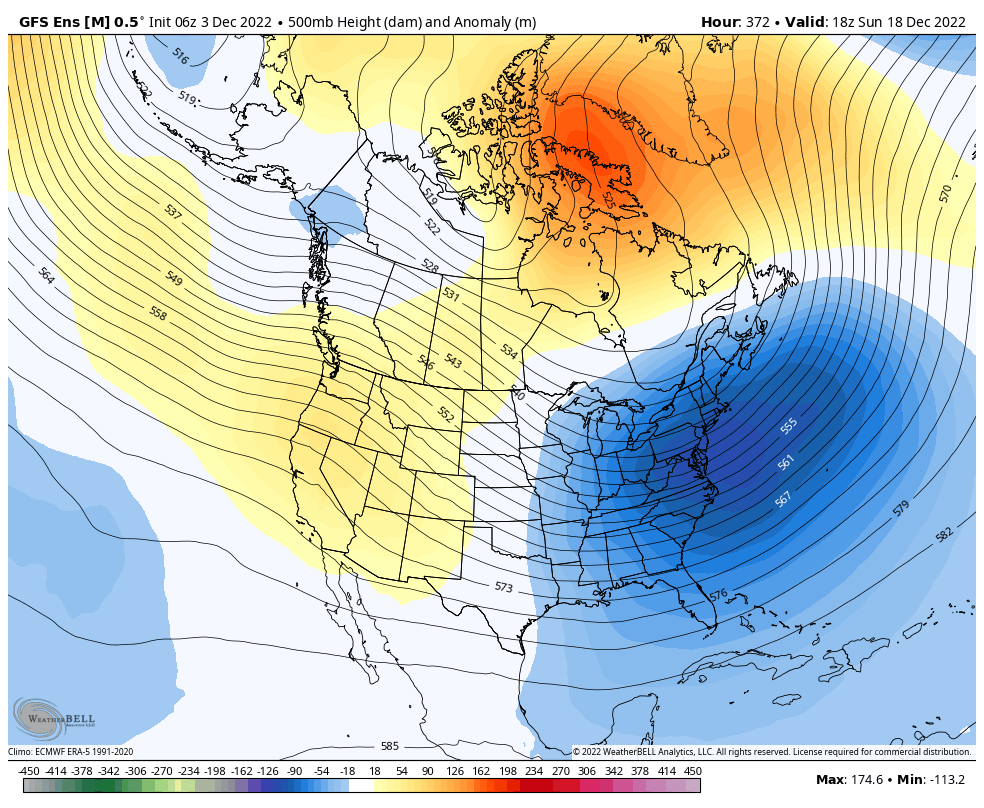 Hopefully, we get plenty of snow followed by cold before anything like that sets up, or hopefully, it doesn't and the storms continue through December.