Mostly dry, quiet weather thru Saturday. On Sunday a storm arrives early in the morning in Northern Utah and brings snow thru early Monday. Significant accumulations are possible.

Book 3 nights of lodging and get your 4th night free! Stay an extra night on us this winter and discover what makes Solitude a locals-favorite mountain. Ski or ride some of Utah's best, unspoiled terrain and enjoy Big Cottonwood Canyon like a local. Visit SolitudeMountain.com to book.

There's not much going on today. Yesterday we have a very weak disturbance roll thru and it did just about as well as you could expect. Up to 2 inches of snow fell at a few lucky ski areas. Otherwise, we are in quiet weather thru Saturday. A weak system passing just to our north could increase clouds on Friday a bit, but otherwise we are high and dry for a few days.

The big story remains the storm for the latter half of the President's Day weekend. Snow should begin Sunday morning in Northern Utah and continue thru the day Sunday, into Sunday night and Monday morning. Models have been fairly consistent in timing and strength, so confidence continues to grow. The latest NAEFS plumes for this storm: 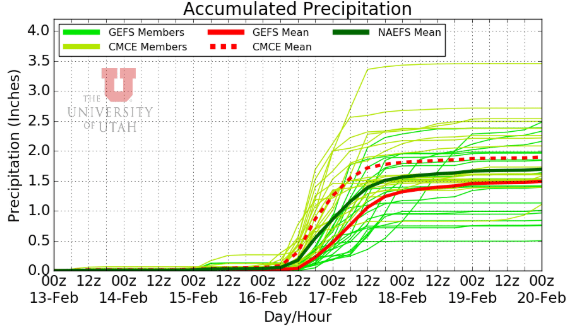 Still quite a large range in potential outcomes, but generally we have a mean of about 1.5" of liquid in the Upper Cottonwoods. That would equate to about 20" of snow. That would be the upper range of the forecast for the Wasatch, so right now I think saying a general 10-20" of snow is expected by late Monday.

Short range models will be coming into range later today so we should have a much clearer picture by this time tomorrow morning...

We should generally dry out next week. Euro has a chance for a weak wave around Wednesday, but otherwise high pressure looks like it is going to take control for awhile. I am not going to speculate quite yet on when storms will return.