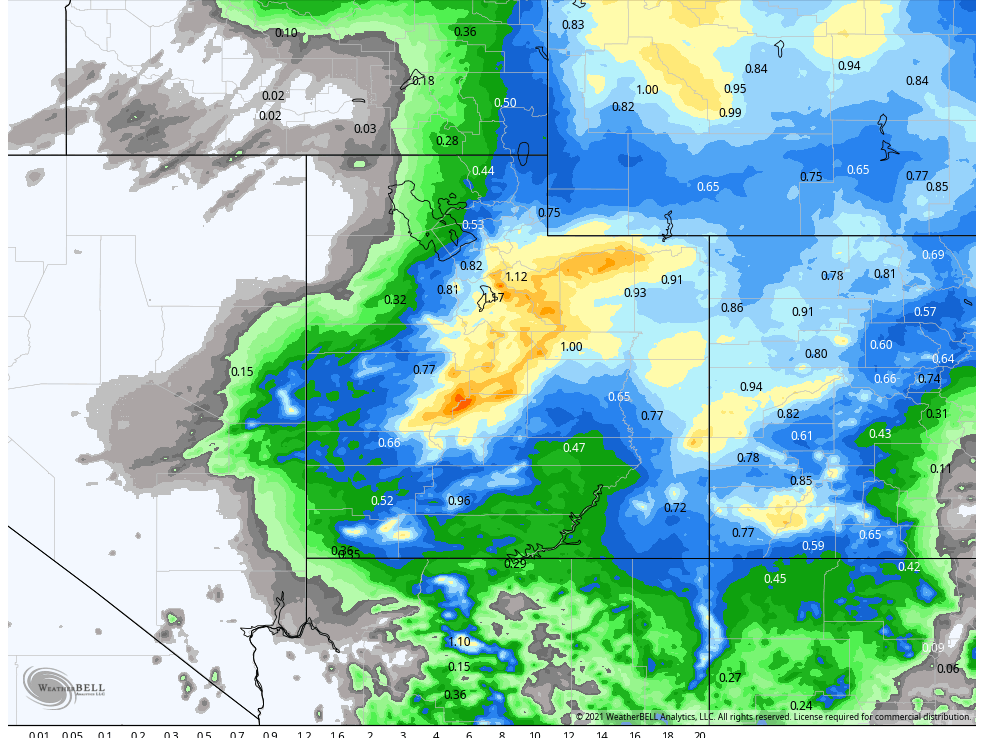 It's been a hot, smoky summer here in Utah. Relief is on the way as a trough brings cooler temps and good chances for rain -- and yes, perhaps some (very) high elevation snow this week.

Let's start by summing up the summer so far....

HOT. and SMOKY. Those are the two words that sum it up best I'd say. 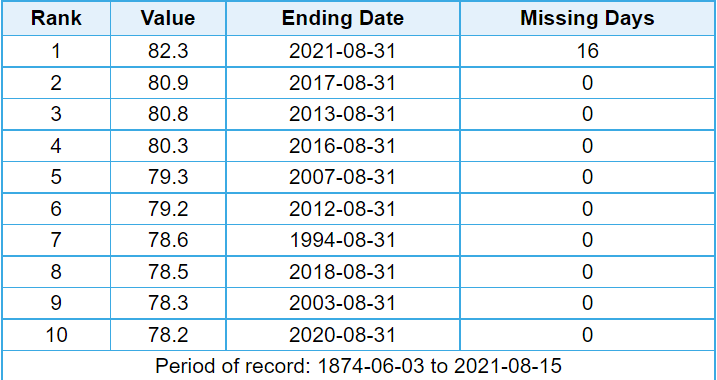 We are 1.4 degrees F above the the previous hottest summer (2017). That's a substantial margin. We've also tied the record for most triple digit max temps in one calendar year with 21 so far this year in SLC. We have a slight chance to get there today (Monday) and again tomorrow, then we see a dramatic cooldown which I'll talk more about in the forecast below. We still could, theoretically, break the record later this month if we don't do it today or tomorrow, but the likelihood of 100F days in late August and September drops dramatically.

As for setting the record for hottest summer ever, it's not a lock because we are going to have a big cooldown, but I'd say it's very likely at this point.

The point is, it's been hot.

Smoke: The smoke this summer has been bad! I thought last year was bad, but this summer has been even worse. Largely, this is thanks to huge fires in Oregon and Northern California. The Dixie Fire in California is their state's largest single-start fire in history at over half a million acres and still raging. There's so much smoke in the atmosphere, that it's almost impossible for us to clear up until the fires are out. We may see some periodic improvement, but I expect smoke to stick around with us well into September.

Precipitation: While temps and smoke have been awful this summer, we have had decent amounts of precipitation, especially in southern Utah. Several monsoonal moisture surges brought quite a bit of rain to southern Utah mountains and deserts. Of course, this caused issues with flash flooding, but the moisture is desperately needed and none of us are complaining. The precip has been more sporadic in Northern Utah and generally we are closer to average up north. However, SLC downtown has now twice been hit by torrential rain storms that caused urban flash flooding.

Forecast: I haven't had too much good news to share this summer, but we finally have a fall-like trough that will push into the region this week. Utah should see widespread showers and much cooler temperatures, with high temps in Northern Valleys only making it to the low to mid 70s later this week. We will also see quite a bit of rain as evidenced in this Blend of Models output: 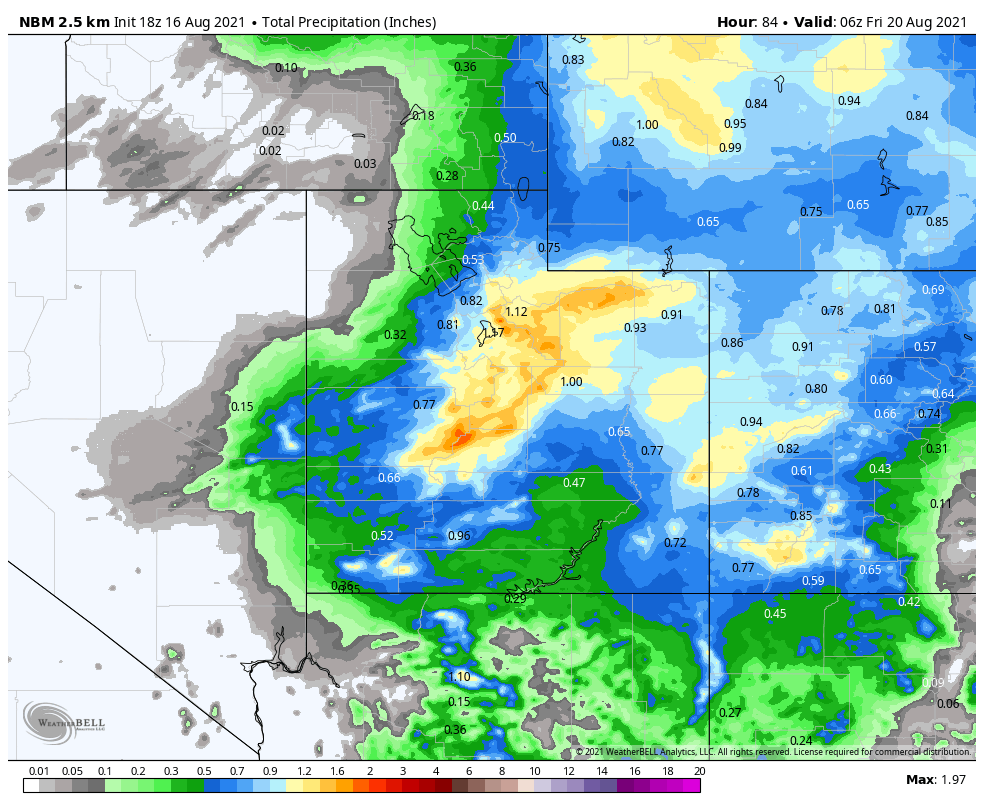 Highest amounts are likely to be in Central Utah and the Uintas, but the entire state stands a decent chance for rain. Heaviest precip should be Tuesday evening - Thursday. With the cool temps and precip, you may be wondering if snow is possible. The answer to that is "yes". ECMWF has been consistently showing the chance for snow in the high Uintas later this week: 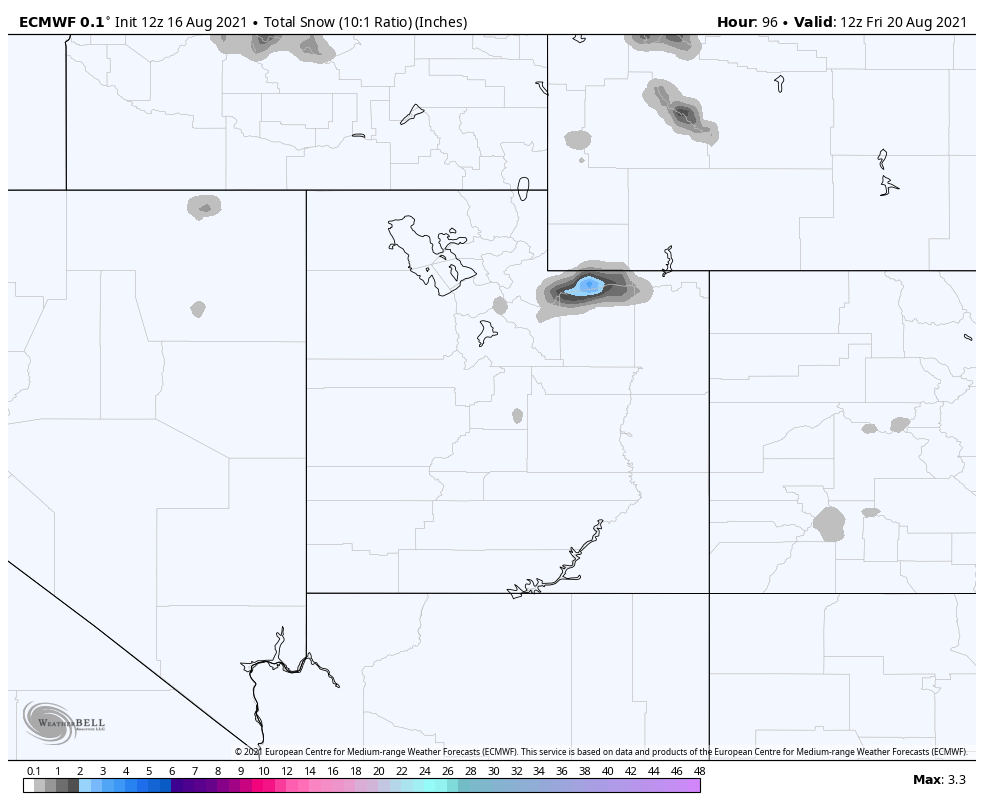 It's not much, but a light coat of white is possible above 10,000 feet on Thursday and/or Friday morning.

Temps should remain cooler than average through the upcoming weekend and we could see a reinforcing shot of precip and cooler temps on Saturday. We should finally warm up early next week (Aug 24 and beyond). Hopefully we stay well below triple digit range...

La Nina is looking more likely again this year. We had La Nina last winter if you remember. Generally that means little for us in Utah. Perhaps it just loads the odds in favor of areas farther north just a bit... We'll take a longer look at that next month.