By Sam Collentine, Meteorologist
Posted 2 years ago
May 12, 2020 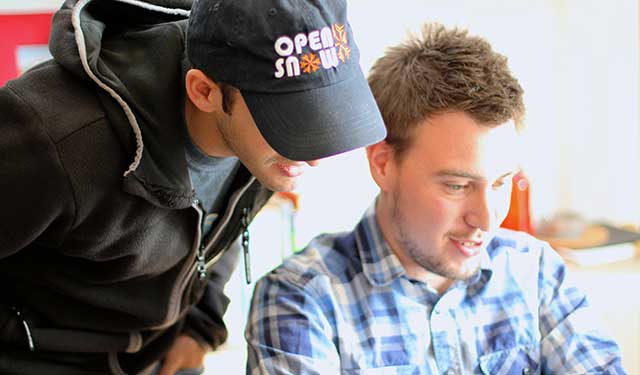 If weather forecasters could only look at one map, the 500 millibar height map would be it.

For the team here at OpenSnow, we use the 500 millibar height anomaly map in our Daily Snow Forecasts to help us detail areas of storminess and areas of drier conditions in the upcoming weather pattern.

In the 500 millibar height anomaly map below, it can be as simple as purple for cold/stormy (low pressure) and orange for warm/drier (high pressure). 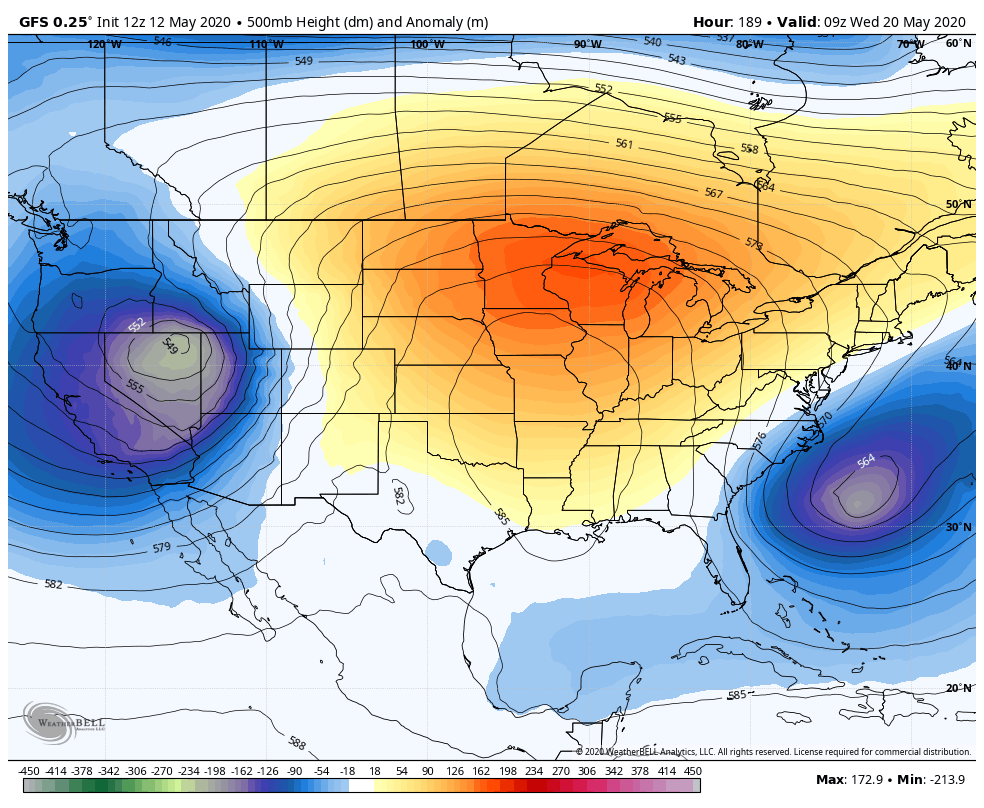 The following are examples of the basic weather patterns often seen in the 500 millibar height map. These patterns can occur just about anywhere in the world outside of the tropics. The images also show the typical locations of weather associated with the basic patterns. 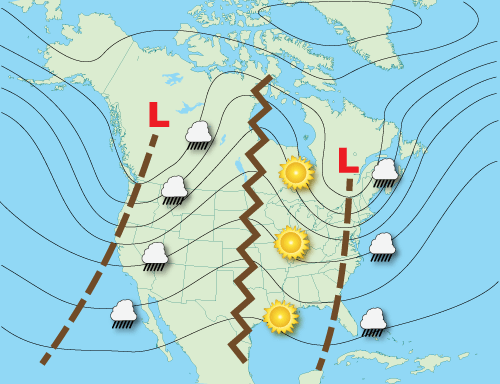 Whether longwave or shortwave, by far the most common pattern seen in upper air charts is just plain troughs (low pressure) and ridges (high pressure). These waves and troughs are considered "open" as, for the most part, there is no closed circulation associated with the waves. 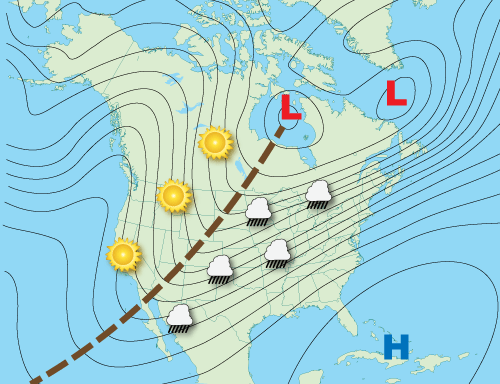 A trough's axis is usually not directly in line from north to south but has some tilt relative to the poles. 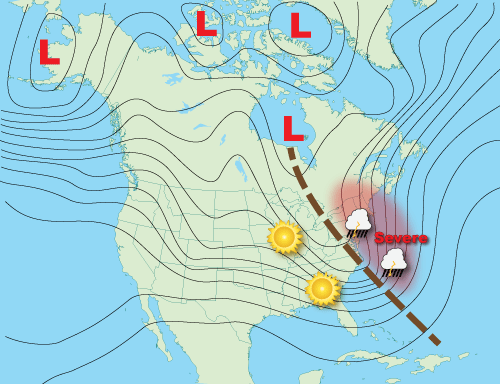 Negatively tilted troughs usually begin as positively tiled troughs. As the short-wave energy races east though the longwave it distorts its shape from positive to neutral (north-south) orientation to a negative (northwest to southeast) orientation.

These types of troughs produce the most severe weather. This is because there is a strong southerly surface wind with warm air underneath the incoming cold air in the upper atmosphere creating unstable conditions.

Also, there is a large change in wind direction from the surface into the upper atmosphere (called wind shear) which aids in the formation of supercell thunderstorms. In the example above, the New England states would be under a threat of severe weather. 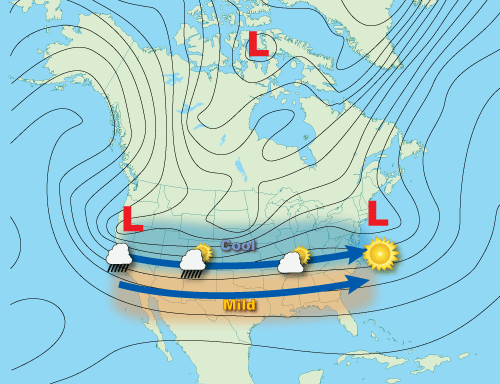 When the airflow is parallel (or nearly parallel) to the latitude lines then it is considered to be a zonal flow. Surface level storm systems, and associated cold fronts, move very fast from west to east in zonal flows but have very little north to south (or south to north) movement.

As a result, locations to the pole-ward of a zonal flow will remain cool or cold, while equator-ward, the weather remains mild or warm. Usually, there is a positively and negatively tilted trough at each end of the zonal flow. 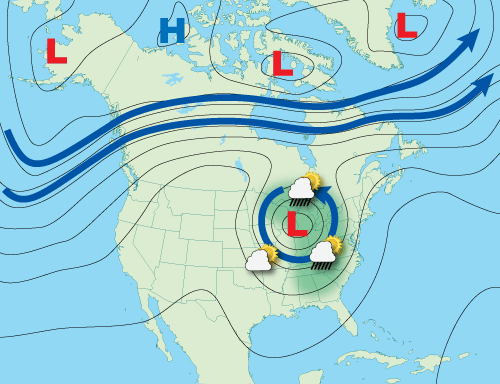 These are persistent low-pressure areas that have become isolated or "cut-off" from the main airflow.

They usually result from a strong short wave moving south on the west side of troughs that extended the trough toward the equator. The momentum of the short wave pulls the trough out of the main airflow and forms a closed, low pressure, circulation.

While modern weather computer models forecast their drift rather well they still tend to forecast the closed low pressure to open up and rejoin the main airflow aloft too quickly.

They can occur at any time of the year and just about anywhere on the planet. Unsettled weather occurs over the eastern half of cut-off lows, though there can be some precipitation wrapping around the north end of the low affecting the northwest quadrant.

Blocking patterns occurs when centers of high pressure and/or low pressure set up over a region in such a way that they prevent other weather systems from moving through. When the blocking pattern is in place, other systems are forced to go around it. Blocking patterns can remain in place for several days, resulting in long spans of persistent weather for locations under the block. 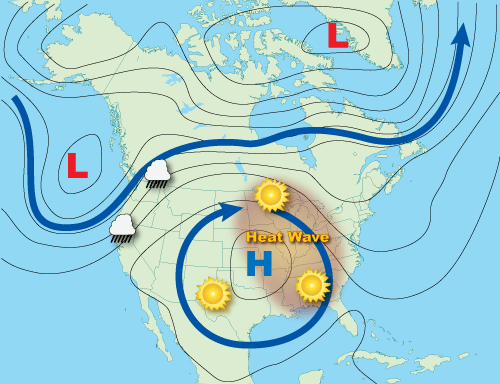 Typically, a summertime occurrence, blocking highs are responsible for major heat waves. Any precipitation is usually shunted around the periphery of the high-pressure area.

High pressure aloft causes the air to subside or sink. This downward motion compresses and warms the air in the lower atmosphere while simultaneously trapping heat rising from the earth's surface, leading to heatwaves.

The skies are usually clear due to the downward motion of air. Eventually blocking highs will weaken when a short wave moves over the top of the high causing it to decrease with an end to the heatwave. 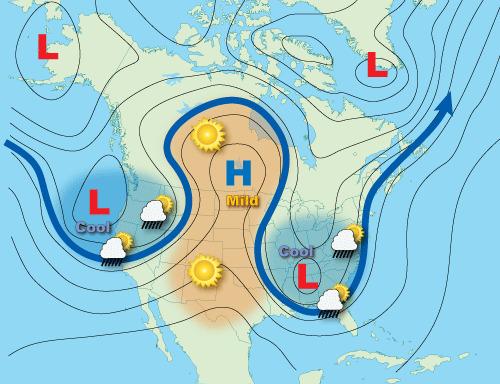 Omega blocks get their name because the upper air pattern looks like the Greek letter omega (Ω). Omega blocks are a combination of two cutoff lows with one blocking high sandwiched between them.

Because of their size, Omega blocks are often quite persistent and can lead to flooding and drought conditions depending upon one's location under the pattern. Cooler temperatures and precipitation accompany the lows while warm and clear conditions prevail under the high. 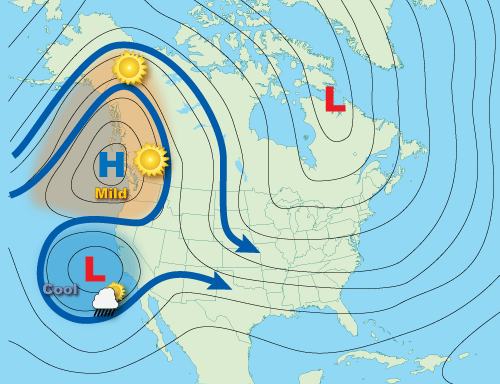 Rex blocks are characterized by a high-pressure system located pole-ward of a low-pressure system. The Rex block will remain nearly stationary until one of the height centers changes intensity, unbalancing the high-over-low pattern.