Our snow storm has now officially moved east of the area. A deep low pressure system off the California coast is sending moisture into the Great Basin this week. Waves of moisture will brush Utah during the week with a better chance for snowfall next weekend.

Powder7 Ski Shop is launching their Cyber Monday Sale today! You'll find their best deals of the year on new and used skis, plus boots, bindings, layers, helmets, goggles, and more from brands like Black Crows, Patagonia, Smith, Volkl, and Salomon. The best part? You can gear up without ever leaving your couch by shopping online at Powder7.com

We are officially done now with what was a 72+ hour storm that brought some HUGE snowfall totals to Utah. A few areas reached 5 FEET of new snow and, man, did it ever ski well! I had a great couple days of getting deep in the fluff. Feels so good to be back where I belong!

Speaking of back we were belong, we are now above average for almost all mountain locations in terms of snowpack! NRCS website seems to not be working today, so I'll hopefully have more info tomorrow, but I was able to pull up this year's snowpack at Snowbird snotel station: 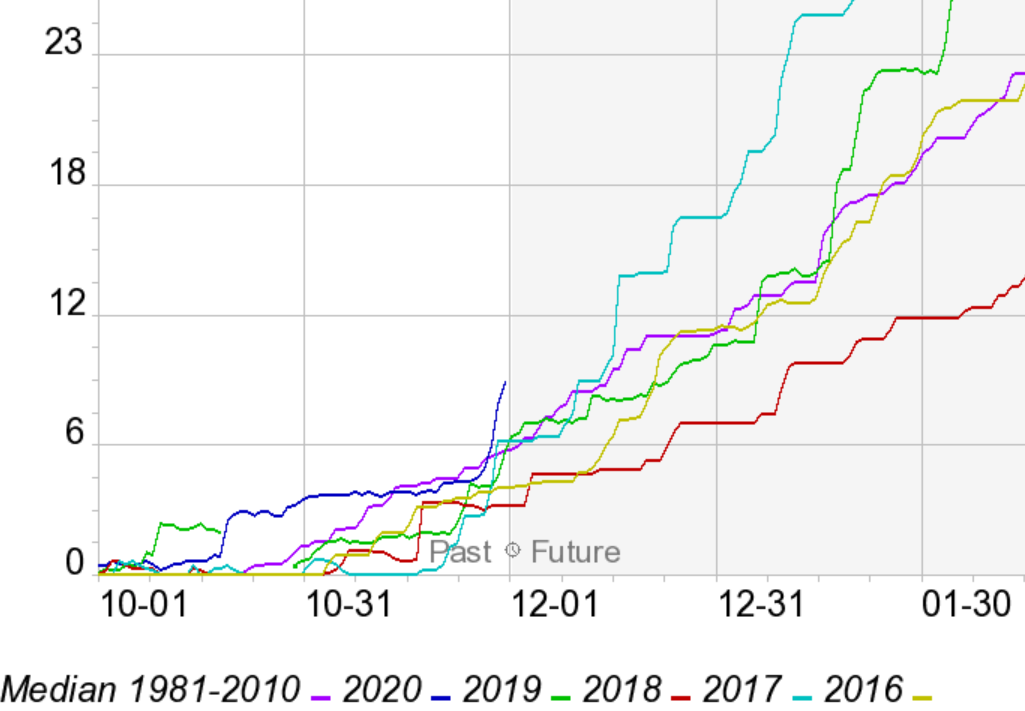 The dark blue line is this year. Notice we've spiked up above all of the prior four years and the 30 year median. We currently sit at 154% of median snowpack for the date. This is, however, a high elevation north facing station that maintained all that October snow. Anything south or west facing at lower elevations lost most, if not all, of its October snowfall and had to start from scratch. It's worth noting that the numbers may appear better than they actually are for some locations. Still, considering I was giving November 50/50 odds of being our driest on record back around mid-month, we can all call it a huge win to have finished the month with such bountiful snowfall.

Right now, we have a deep trough of low pressure sitting off the coast of California. This trough is sending in an atmospheric river of moisture into the Central Sierra Nevada. This can easily be seen by looking at PWAT: 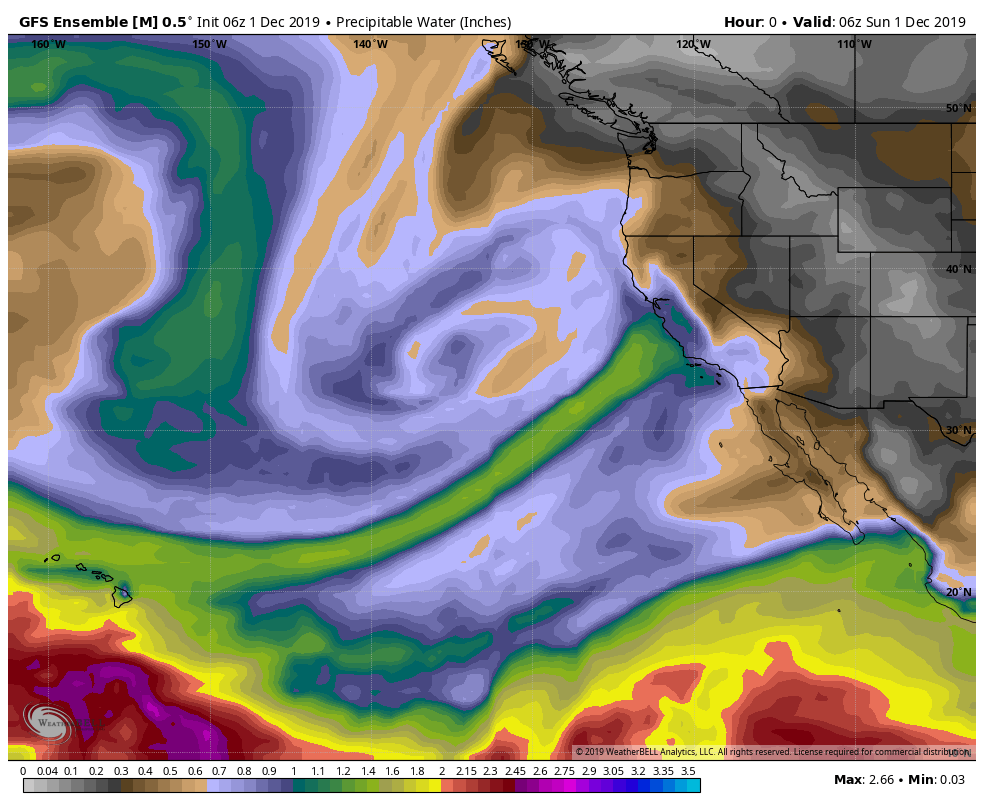 That stream of moisture extends all the way to Hawaii. The low, however, is basically stalled and will mostly weaken and dissipate before it ever progresses inland to Utah. That means that moisture will have a difficult time penetrating inland. A few waves of moisture will eject into the Great Basin, but they will be weak and models suggest they may miss us for the most part.

The first wave of energy passes just north of Northern Utah on Monday. We should see clouds and perhaps some snow showers, but accumulations should be light.  Then, a second wave ejects through Wednesday into Thursday, but this wave may track south and mostly thru Arizona.  Both of these waves can be seen by looping the GFS:

The first one targets the Tetons to our north, and the second wave targets Northern Arizona. Both brush Utah with only light amounts.

It does look like there will be a final wave next weekend that could be more of a direct hit. Still, doesn't look like a major system, but we could see more substantial accumulations on Saturday and/or Sunday (December 7-8).

We are going to transition patterns once again during the second week of December. So far, this season has been characterized by a highly amplified pattern with slow-moving, cut-off lows. It looks like we could get a more traditional progressive pattern with colder systems dropping out of the Gulf of Alaska. Latest models continue to show this possibility for middle of December: 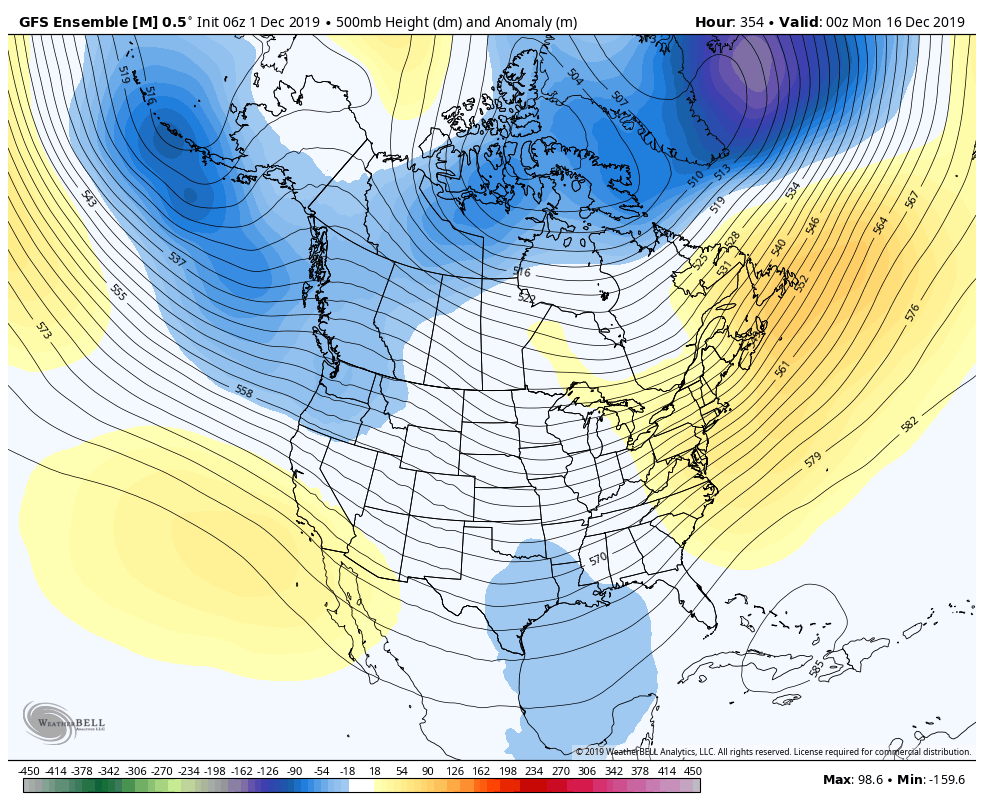 The first half of December doesn't look excessively snowy, but it doesn't look totally dry either. The good news is that we have the base for plenty of terrain to open in the coming weeks. Then, signs of an encouraging pattern to carry us into the holidays are present. Not a bad start to the new season!