One North, One South, One in between?

A series of relatively weak disturbances will ripple thru Utah over the next week. Accumulations should be relatively light.

Today (Monday), we are watching a wave a moisture brush northern Utah. The farther north you are in the state, the more likely you are to see clouds and perhaps high elevation snow showers. This disturbance is weak. As the best moisture is to our north and especially to our west where the Sierra Nevada are measuring feet of snow.

Best snow showers will be from SLC north toward Logan and in the mountains. You can see the GFS total output for this wave below: 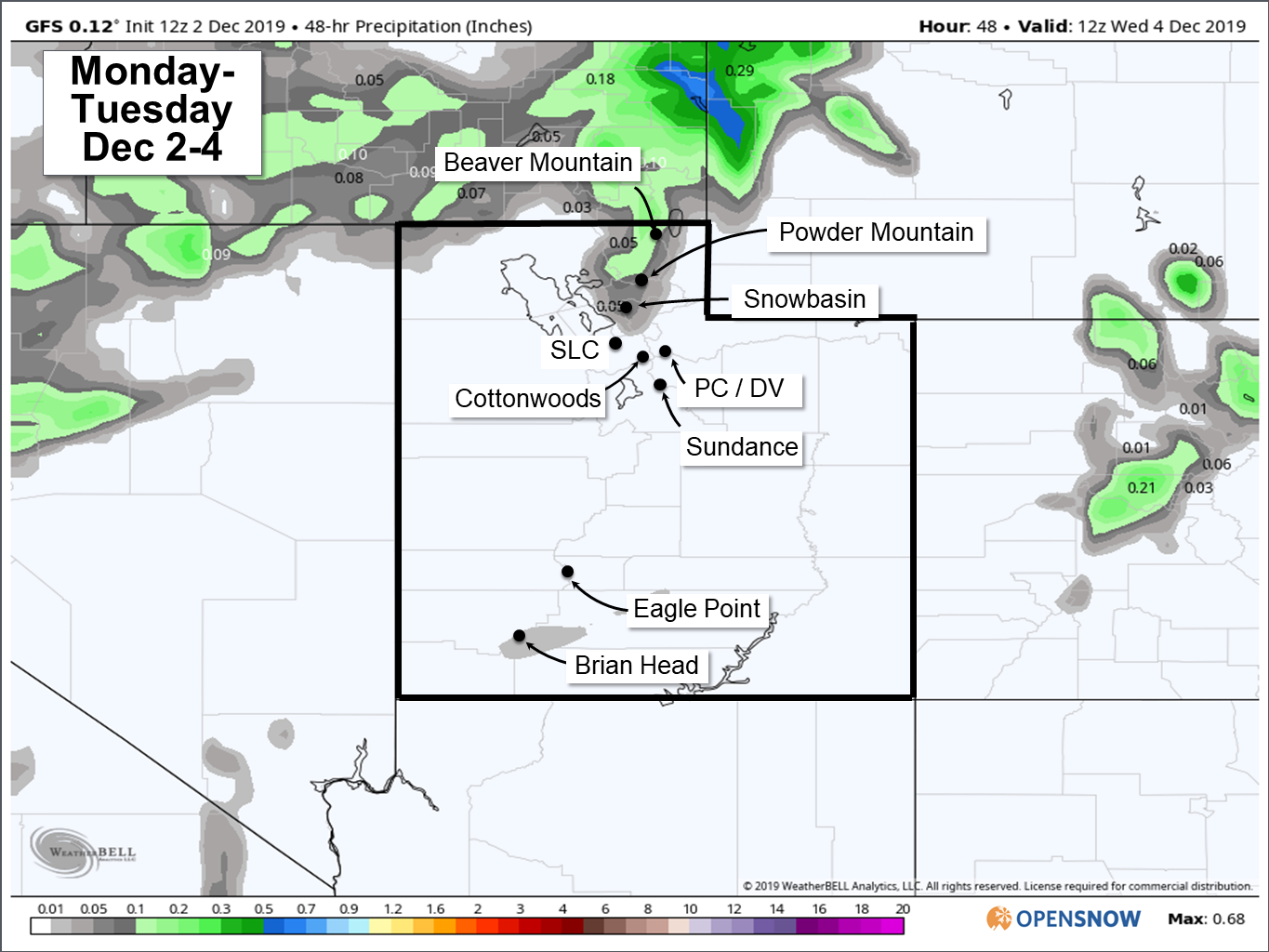 Again, very light accumulations likely under an inch at best. We should clear out by Tuesday afternoon.

Next, we'll have another wave of energy pass thru on Wednesday into Thursday. This wave is focusing on Southern Utah.  Here's what it looks like in the GFS model: Perhaps a few inches for SW Utah including Brian Head, but still not a big snow producer.

The third and final wave is timing for this weekend, likely late Saturday into Sunday.  The GFS shows a halfway decent system that would impact almost all Utah mountains with moderate snowfall: 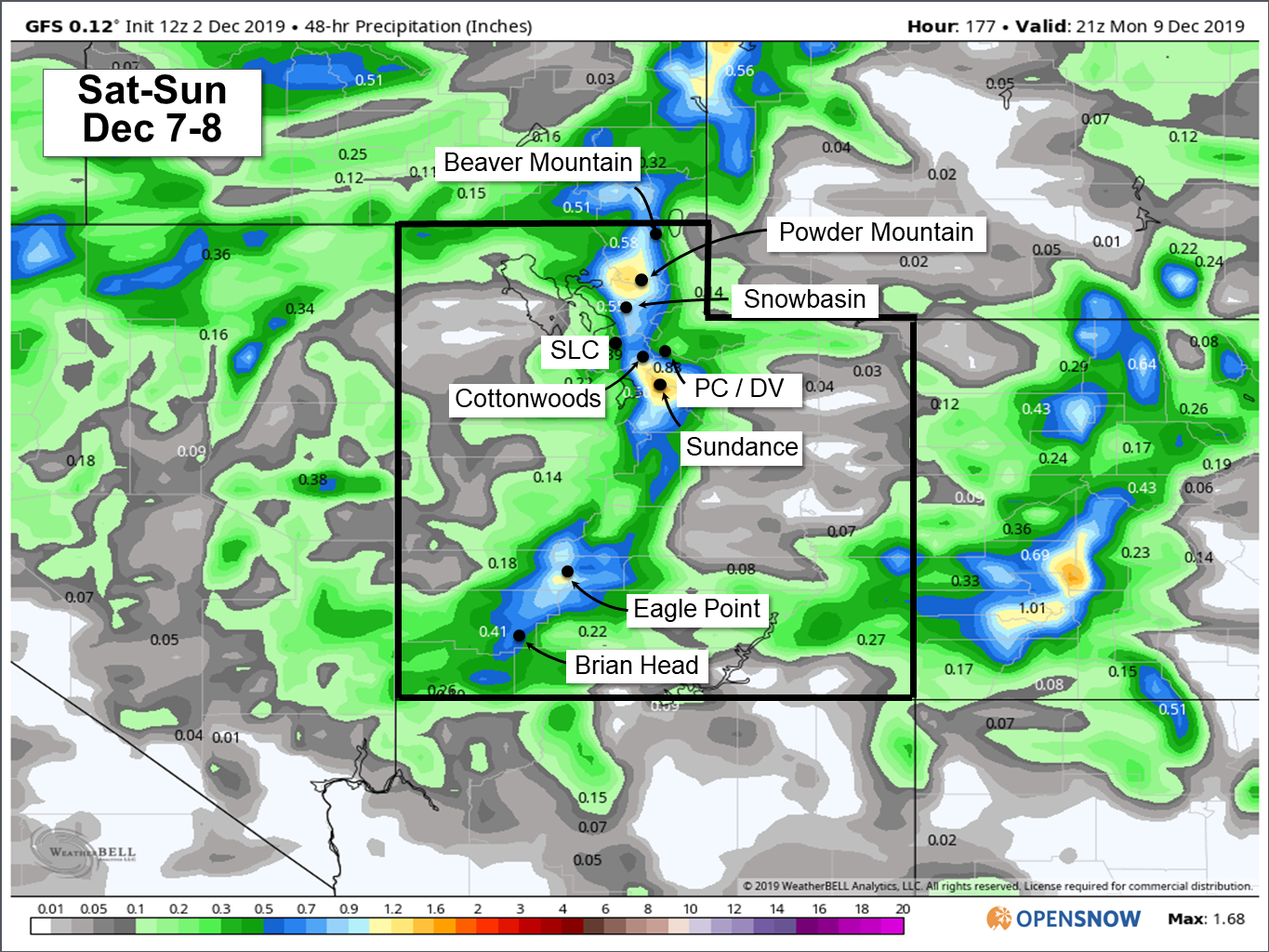 However, confidence is very low on this storm.  If you look at the GEFS ensembles for the Upper Cottonwoods... 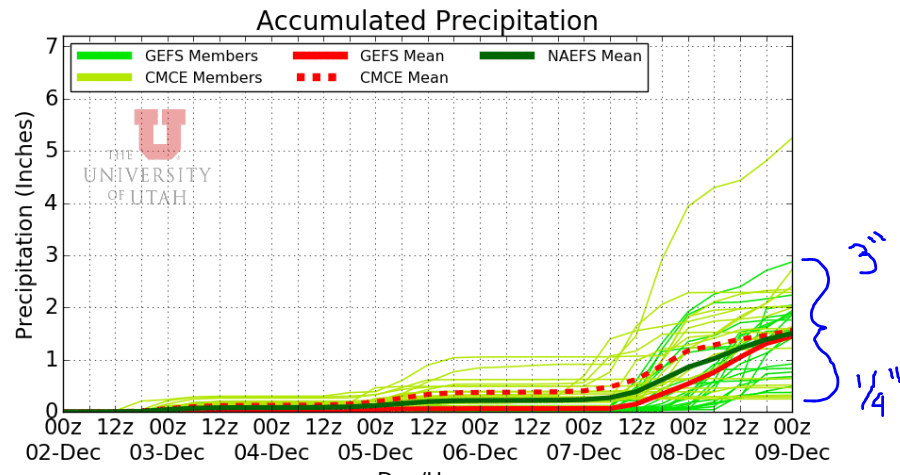 A huge range in possible amounts, ranging from 0.25" all the way to almost 3" of liquid.  That's like saying anywhere from 3" of snow to 3 feet of snow.  The mean is something in between, with something in the 6-12" range.  With confidence so low, however, we can only hope this storm delivers at this point.

The extended range is tricky right now.  A couple days ago, both the GFS and Euro had a good pattern setting up with a chance for stronger, colder storms.  Now,  the GFS has moved ridging closer to the coast which would send the storms east of the divide and into the plains rather than the Great Basin.  The Euro, on the other hand, continues to depict a scenario which would be better for snow in Utah.  We will just have to wait and see which idea the models latch onto again.